Save the children from Israel's deadly drones 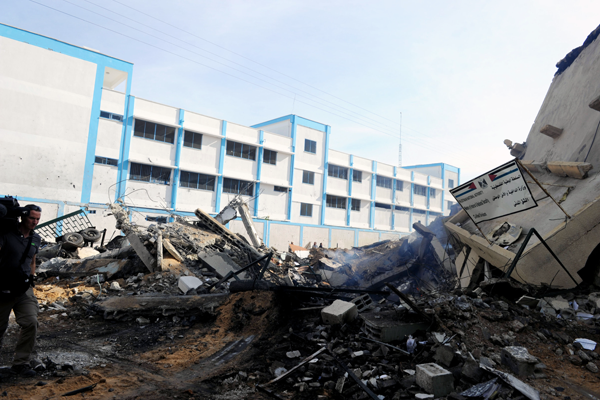 A school run by the UN Relief and Works Agency for Palestine Refugees in the Near East (UNRWA), pictured in the background, suffered damage after Israeli bombardments targeted the Ministry of Interior’s Civilian Affairs office in Gaza City on November 16, 2012. (UN Photo/Shareef Sarhan)

One year on, despite evidence of war crimes, justice has not been served for victims of Israel's November 2012 military offensive on Gaza, which killed more than 30 children, writes Brad Parker in Al-Jazeera.

Ramallah, 27 November 2013­—Mahmoud Khousa was 13 when he died. He was killed last November by an Israeli drone-fired missile on the last day of Operation Pillar of Defence, an eight-day Israeli military offensive on the Gaza Strip. More than 30 Palestinian childrenwere killed. Yet one year on, despite well-documented evidence of war crimes and serious violations of international humanitarian law, there has been no accountability and no justice for Mahmoud's family.

Israel's military policy toward Gaza is one of deterrence. Just last week, Israeli Prime Minister Benjamin Netanyahu, speaking to the Israeli military Gaza division and marking the one-year anniversary of the assault, declared, "Deterrence is achieved by the enemy's knowing that we will not tolerate attacks on our communities and our soldiers, and that we will respond in great strength." The "great strength" that Mr. Netanyahu refers to is also known as disproportionate force.

Since 2006, the Israeli military has sought to achieve "deterrence" by implementing something known as the "Dahiya doctrine," or "the application of disproportionate force and the causing of great damage and destruction to civilian property and infrastructure, as well as suffering to civilian populations." It derives its name from the Hezbollah-controlled neighbourhood of Dahiya in Beirut, which Israeli forces leveled in the summer of 2006 during its assault on Lebanon. Following Operation Cast Lead in December 2008 to January 2009, which resulted in the death of over 350 children, the United Nations Fact-Finding Mission on the Gaza Conflict found Israeli practices consistent with this doctrine.

The eight days of Operation Pillar of Defence were characterised by disproportionate force directed at government and civilian infrastructure, residential neighbourhoods, and, in the case of Mahmoud, individual civilians. According to B'Tselem, an Israeli human rights organisation, 167 Palestinians died during the offensive, with 80 percent of uninvolved fatalities occurring in the last four days of the operation. In the deadliest single attack, 10 members of the al-Dalou family, including five children ages 1 to 14, were killed in an air strike that levelled the family home, according to evidence collected by Defence for Children International Palestine.

During the November offensive, the Israeli military relied heavily on unmanned aerial vehicles or drones to carry out many of the reported 1,235 strikes on the Gaza Strip. Israeli aerial drones are equipped with advanced sensors and cameras that "provide a clear image in real time of people on the ground, day and night," according to Human Rights Watch. Rather than being indiscriminate, "Israeli strikes are conducted in a precise and surgical manner," according to an Israeli military spokesperson statement issued during the attacks.

On November 21, 2012, Mahmoud Khousa was a victim of that precision in the street outside his home in Gaza City. Around 2 pm, he left his home to buy a pencil for his sister in a nearby shop. While walking in the street, which was reportedly calm with no military activity, he was targeted and killed by a drone-fired missile.

While both Israeli forces and Palestinian armed groups in Gaza unlawfully targeted civilians during the offensive, the use of drones in attacks on civilians, particularly children, is extremely troublesome. Israeli authorities boast that drones enable them "to carry out the most precise surgical strikes," which suggests that Mahmoud was intentionally targeted and killed by an Israeli soldier that would have been able to see that he was a child, according to Amnesty International.

Since the outbreak of the second intifada in 2000, more than 1,000 children have been killed as a result of repeated Israeli military offensives on Gaza. The current regime of collective punishment implemented through a six-year-old blockade, targeted assassinations and regular military offensives all but guarantees the situation for Gaza's children will continue to deteriorate.

In a context where systemic impunity is the status quo, the need for justice and accountability is urgent. One year on from Operation Pillar of Defence, there has been no independent, impartial investigation into Mahmoud's killing or any of the other civilian deaths.

Brad Parker is an attorney and international advocacy officer with Defence for Children International Palestine. This article was originally published on Al-Jazeera.com:
http://www.aljazeera.com/indepth/opinion/2013/11/save-children-from-israel-deadly-drones-201311264457632240.html.