Ramallah, March 31, 2022— “When I am in the house, I do not feel any kind of safety or stability,” 17-year-old Khalil Samir Khalil Abdulatif told Defense for Children International - Palestine. “The constant feeling I have is anxiety, instability, and even fear because of the unstable conditions in the neighborhood and the continuous attacks by the police and settlers on the residents.”

“I always feel like there is a possibility that the police or settlers will break into our house and attack us for no reason.” 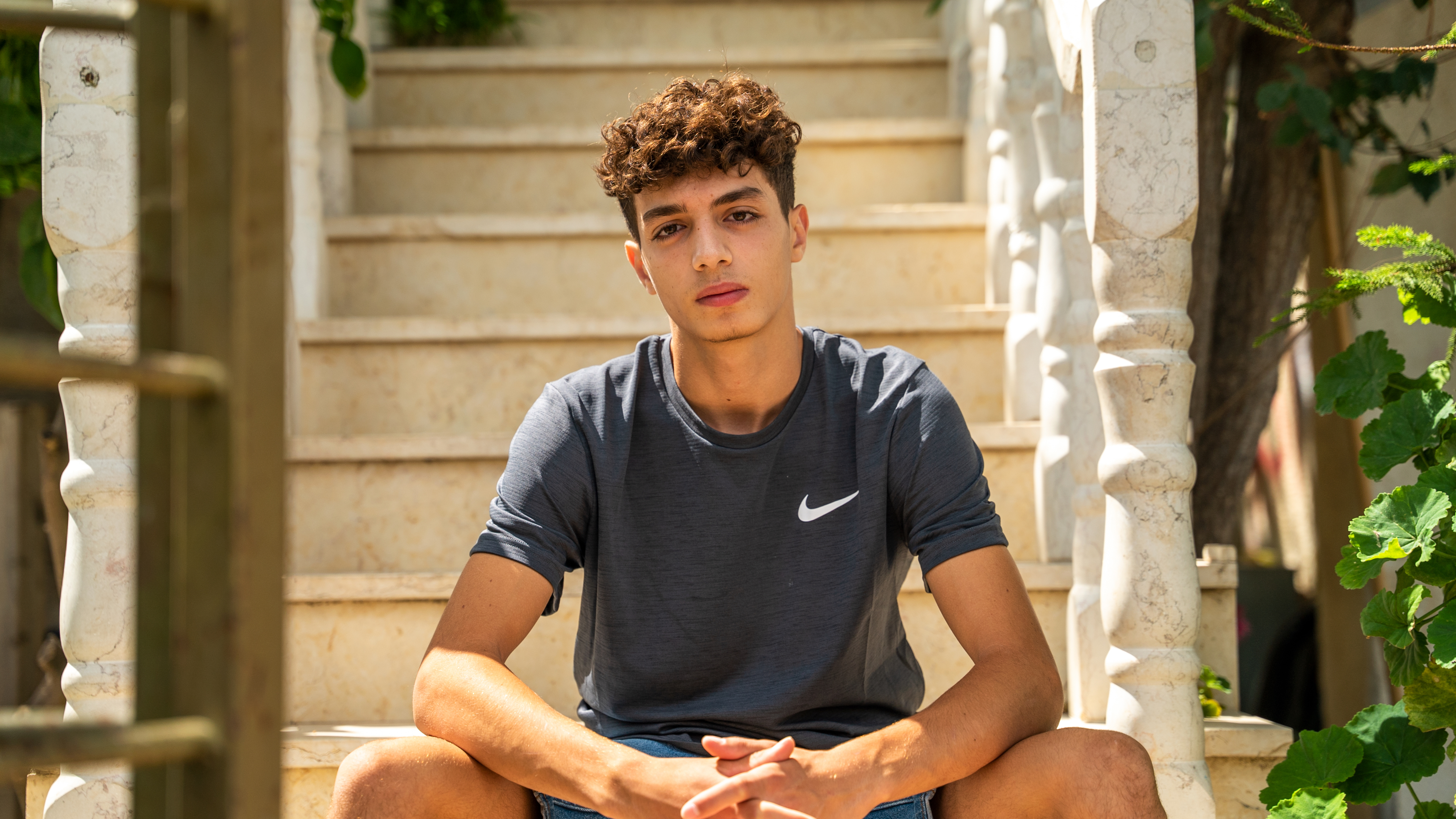 Palestinians in Sheikh Jarrah have been embroiled in a decades-long struggle with Israeli settlers who claim ownership of the Palestinian homes and are trying to expel the Palestinian residents. “This has been the situation since I was born, and I am fully aware of it,” Khalil said. To date, his family has not been threatened with expulsion.

Part 1 The story behind the story

In 1956, the Jordanian government and the United Nations reached an agreement to resettle 28 Palestinian families in East Jerusalem’s Sheikh Jarrah neighborhood, which, at the time, was under Jordanian control. The families were refugees displaced or expelled from their homes in Jaffa and what became West Jerusalem during events Palestinians refer to as the Nakba, or “catastrophe," in 1948. 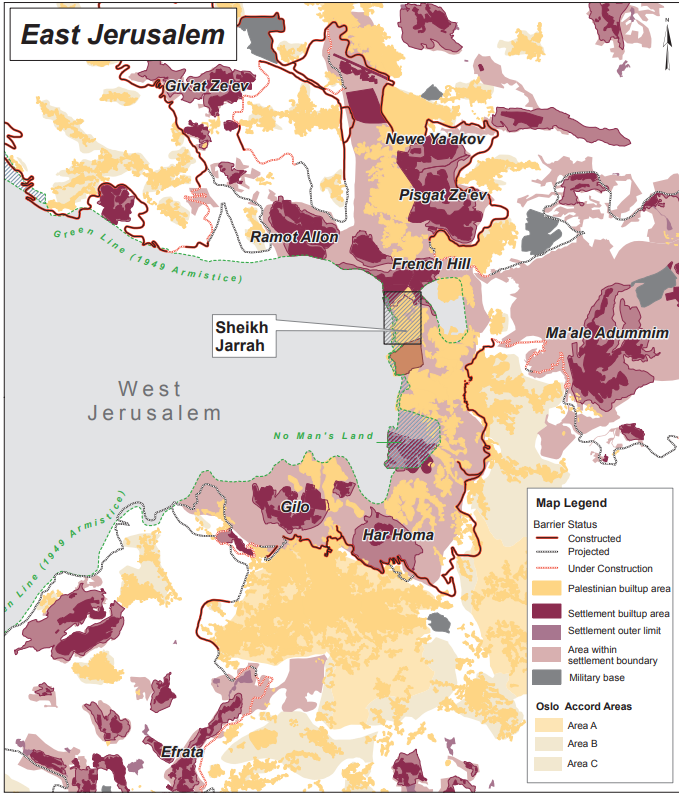 Prior to 1948, there was a small Jewish community living in Sheikh Jarrah whose inhabitants fled during the 1948 war. After the war, the Israeli government gave those Jewish families homes inside Israel that had belonged to Palestinians.

The pre-1948 Jewish owners of the land in Sheikh Jarrah sold their rights to the property to Nahalat Shimon, an Israeli settlement organization, according to the BBC. Nahalat Shimon has utilized Israel’s discriminatory housing, land, and property laws to expel the Palestinian residents and reclaim the land for Jews. Israeli courts repeatedly ruled in favor of the Jewish Israelis claiming the land based on the pre-1948 documents, +972 Magazine reported. Meanwhile, Palestinian residents refused to leave their homes and demanded the Jordanian government provide documents proving their ownership. The Jordanian government provided Palestinian officials with the documents which were handed over to the Israeli Supreme Court in August 2021, Haaretz reported. After the hearing, the court decided to postpone its decision without setting a new date, Al-Monitor reported.

In 2008 and 2009, Israeli authorities forcibly evicted three Palestinian families–comprising 88 people, including 36 children–from their homes, which were taken over by settlers, according to information collected by DCIP. Eight years later, in 2017, Israeli authorities expelled eight members of the Shamanseh family from their home in the neighborhood, according to +972.

In May 2021, another four families (20 adults and 10 children) were threatened with expulsion, according to information collected by DCIP. And three families (13 adults and eight children) were threatened with expulsion in August 2021, according to information collected by DCIP. The residents have rejected deals offered by the settlers to take over the homes after the death of their owners, insisting on staying in their homes and rejecting the settlers' claims, Al Jazeera reported. 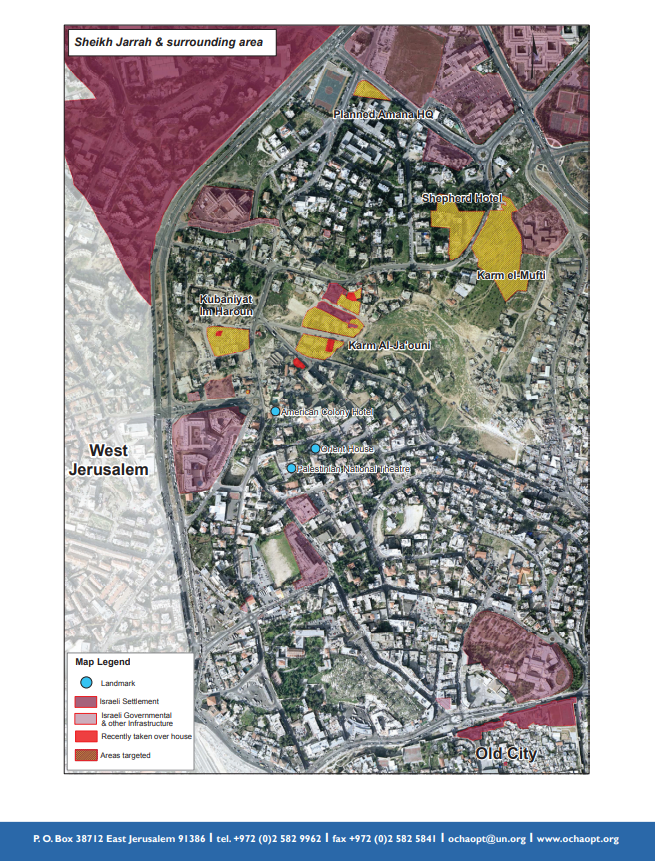 The atmosphere in Sheikh Jarrah in early 2021 was relatively calm. There was no permanent or ongoing tension or anxiety in the neighborhood, despite the presence of two Israeli settlements located in the al-Ghawi home and in half of the El-Kurd family’s house. There would be tension mostly on the Jewish holidays, as Israeli forces restricted Palestinian residents’ freedom of movement. Palestinian residents could not leave or enter the neighborhood without a private permit issued by the Israeli police. Israeli settlers also began to occasionally attack the Palestinian residents by spraying water or throwing trash at them in front of their houses.

Tensions escalated during the Muslim holy month of Ramadan in April 2021 when the Israeli Supreme Court was scheduled to hear arguments concerning a lower court’s decision greenlighting expulsion of Palestinian residents from their homes, +972 reported. Palestinians from across Jerusalem began gathering in the neighborhood in solidarity with Sheikh Jarrah residents and to protest any decision that might be issued to expel the residents from their homes, Khalil told DCIP.

In response, Israeli police erected checkpoints at the entrances to the neighborhood in an attempt to prevent people from coming in. Entry and exit was allowed only for the local residents whose ID cards indicated their current address was in Sheikh Jarrah. Solidarity vigils were suppressed, and settlers attacked the residents and their supporters at the events that did take place, Khalil explained to DCIP. 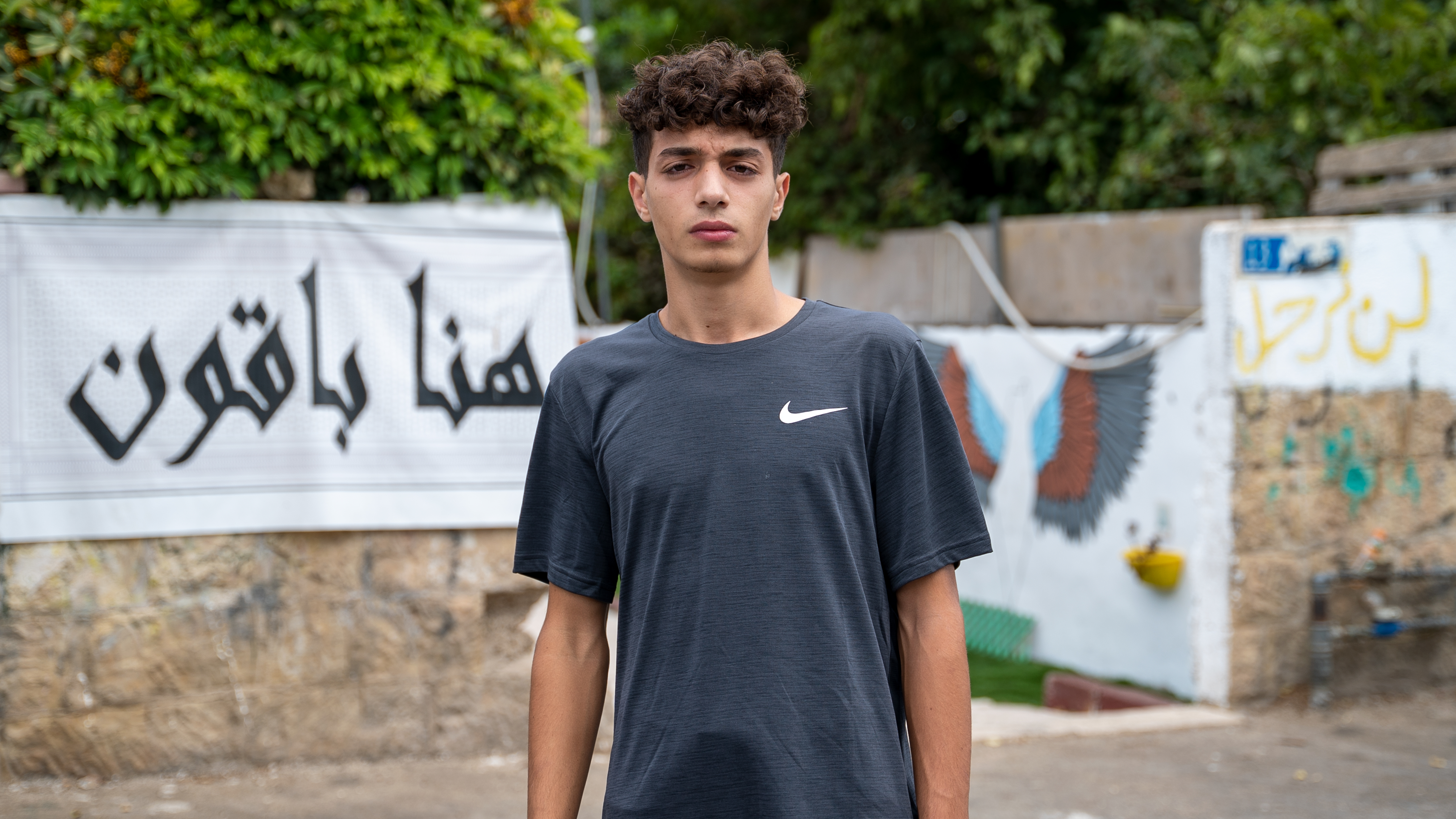 Tensions in Sheikh Jarrah have ebbed and flowed in the months since May 2021 as efforts to expel residents have continued. In December 2021, an Israeli judge issued an eviction order to the Salem family, which cannot be appealed. For now, their expulsion has been delayed because the order issued by the Jerusalem municipality was improperly delivered to the family.

This year, Israeli forces demolished the Salhiyeh family home on January 19 after Israeli police conducted a pre-dawn raid, displacing the seven person family. In 2017, Israeli authorities expropriated the six dunams (1.5 acres) the Salhiyeh family had owned since 1958 to build a school and a kindergarten. Since then, the family fought their expulsion in the courts. In 2021, the Jerusalem District Court ruled that the forcible eviction could proceed, +972 reported.

Part 2 As if I were in a big prison

The unstable and unsafe situation in the neighborhood complicates Khalil’s daily life and creates difficulties. He fears that settlers could attack his family at any time.

“When I go to school, I’m constantly worried about my family because our house is very close to the settlement in the al-Ghawi family's house,” Khalil said. “When I pass through the checkpoints at the entrances to the neighborhood, whether on my way to school or on my return, I feel as if I were in a big prison,” he added.

Sheikh Jarrah residents must show their ID card when they enter and exit the neighborhood. “I remember that once I forgot my ID card, and I had to reach the house via a dirt road,” Khalil said. 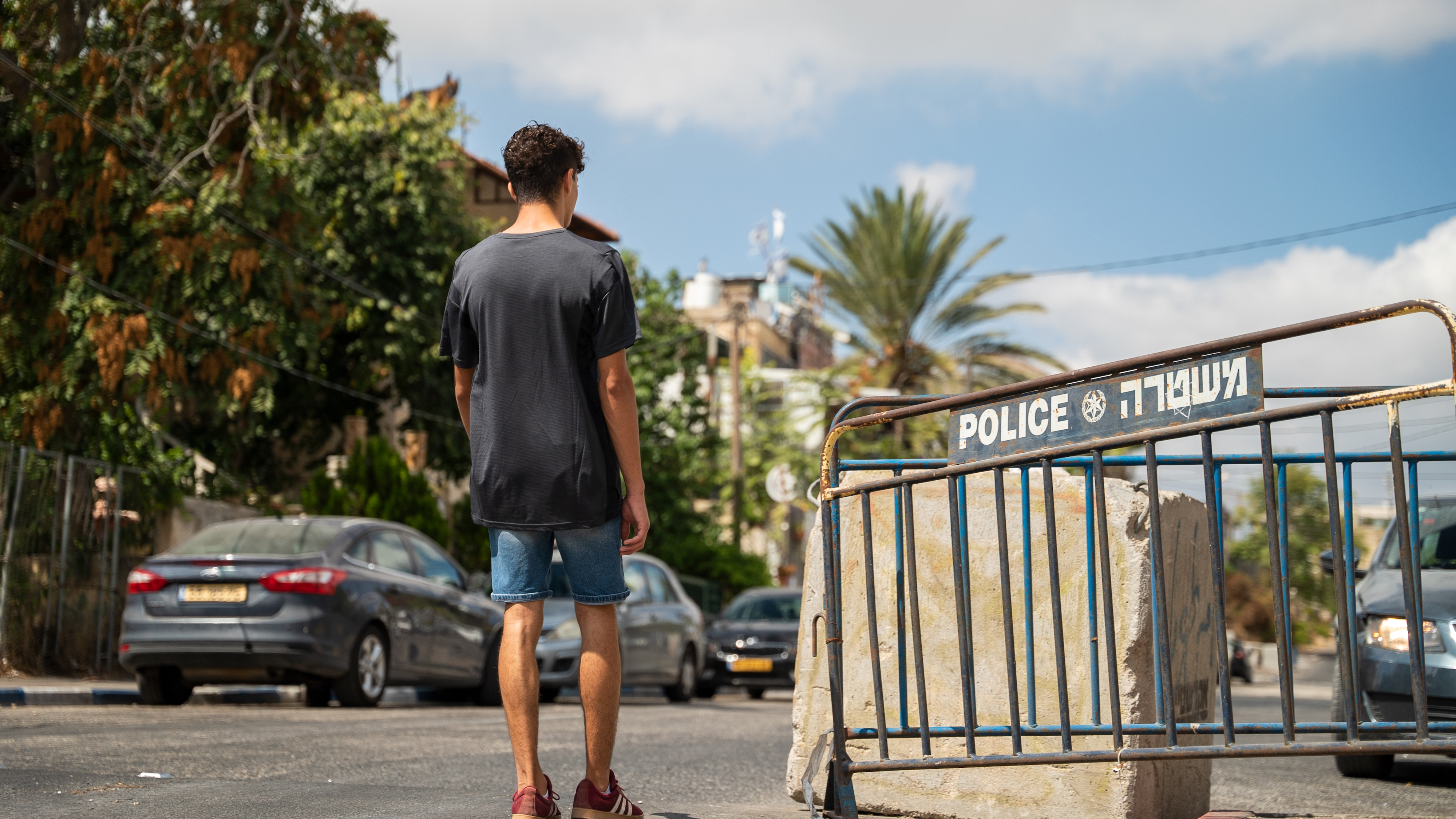 On June 27, 2021, the atmosphere in the neighborhood was very tense. “I remember the Israeli police were suppressing the solidarity activists and local residents that day,” Khalil recounted. “The police were attempting to kick them out by attacking them and targeting them with stun grenades, sponge-tipped bullets and wastewater.”

That afternoon Khalil and his mother were at the front door of their house, when an Israeli paramilitary border police officer passed by and started talking to Khalil in Hebrew.

“I understood what he was saying, he was asking me why I looked at him, but I did not give him any attention and did not respond to him,” Khalil said.

Unprovoked, the policeman attacked and assaulted Khalil. Within minutes, a large group of Israeli paramilitary border police arrived at the home, and they put Khalil in a military vehicle. The border police officer tried to assault Khalil again, but he was stopped by the others.

“I do not remember how I felt when I was arrested,” Khalil told DCIP. “All I could think about was what would happen next. Would I be severely beaten at the police station or anywhere else?”

“The interrogator was shouting the entire time, but I never confessed to anything,” Khalil told DCIP.

“Israeli authorities implement the Israeli Youth Law in a discriminatory manner, denying Palestinian children in East Jerusalem of their rights from the moment of arrest to the end of legal proceedings,” explained Ayed Abu Eqtaish, accountability program director at DCIP. “As a result, Palestinian children are systematically denied the protections afforded to Jewish Israeli children in the same jurisdiction.” 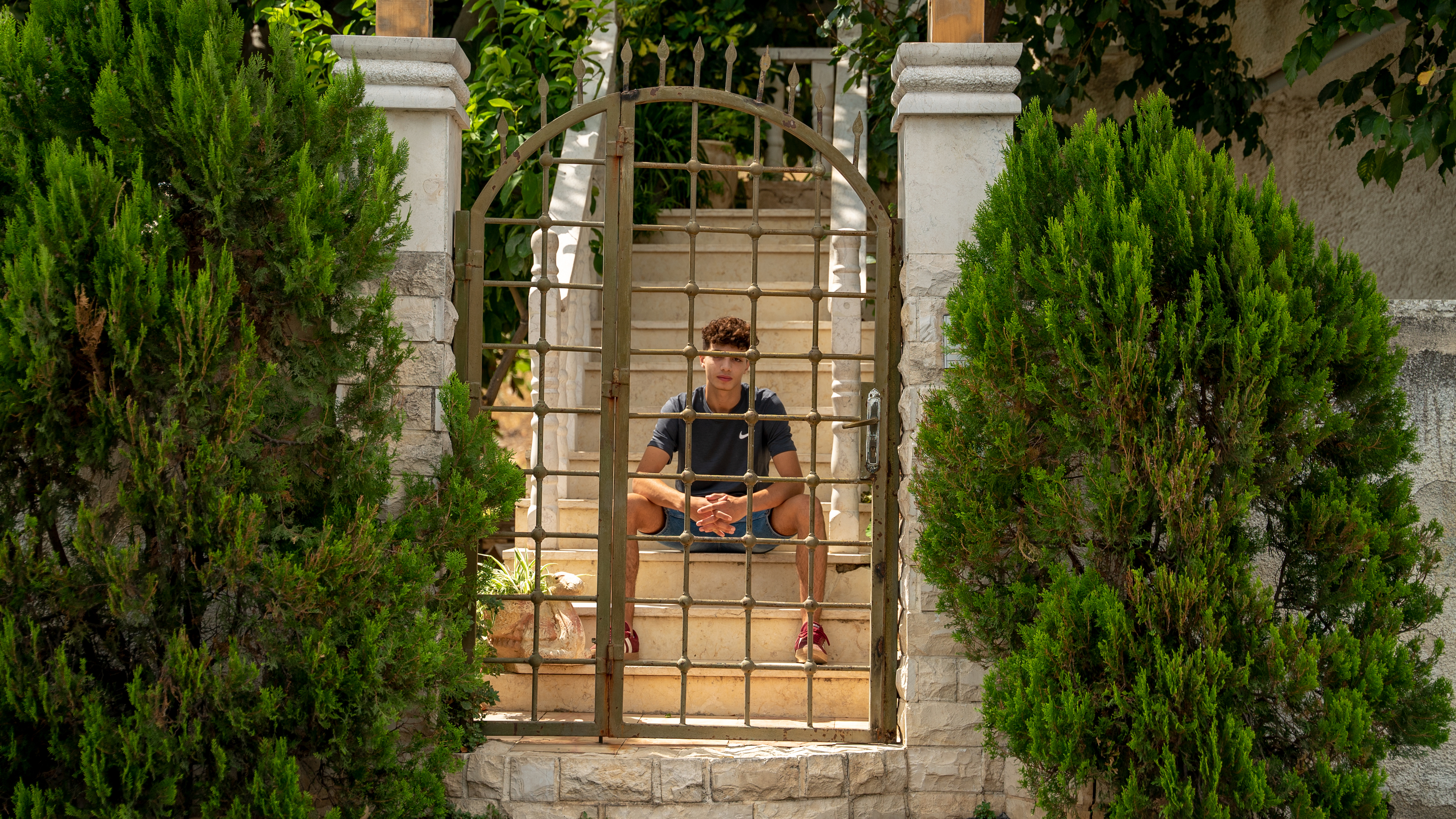 At dawn, Khalil was transferred to Al-Mascobiyya interrogation and detention center located in West Jerusalem where he appeared in the Jerusalem Magistrate’s Court. An Israeli judge approved extending his detention, which Khalil’s lawyer appealed. A decision was later issued to release him two days after his arrest, and to pay a 1,500 shekel ($473) bail, and he was placed under house arrest for a week, according to documentation gathered by DCIP. According to Khalil’s father, his file is still open at the court and was not closed but there is no arrest order against Khalil.

Part 3 Boxing as an escape

It was difficult for Khalil to stay confined to his home when the situation in Sheikh Jarrah was so dire. “On some occasions I had a strong desire to be out on the street and sit with those present [in solidarity],” Khalil told DCIP. 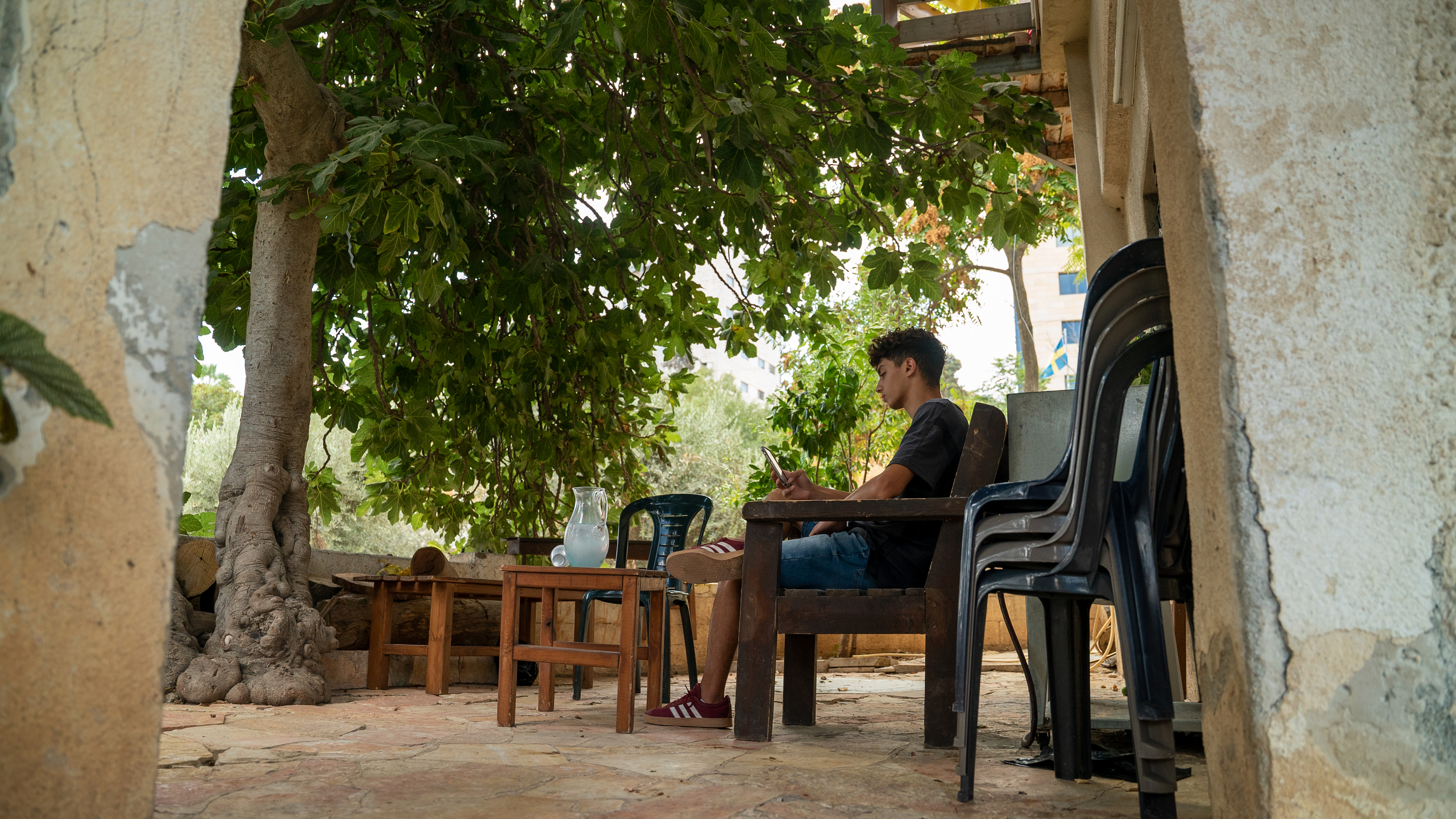 “[During my house arrest], I tried my best to fill my day with different activities, and I would often sit in the yard so that I would not feel I was locked inside the house and forbidden to go out,” Khalil said. “I would get up in the morning and have breakfast. Then I would go to my room and practice boxing.”

“There were many moments and situations in which I was edgy and bad tempered, especially when I felt very bored,” Khalil explained. 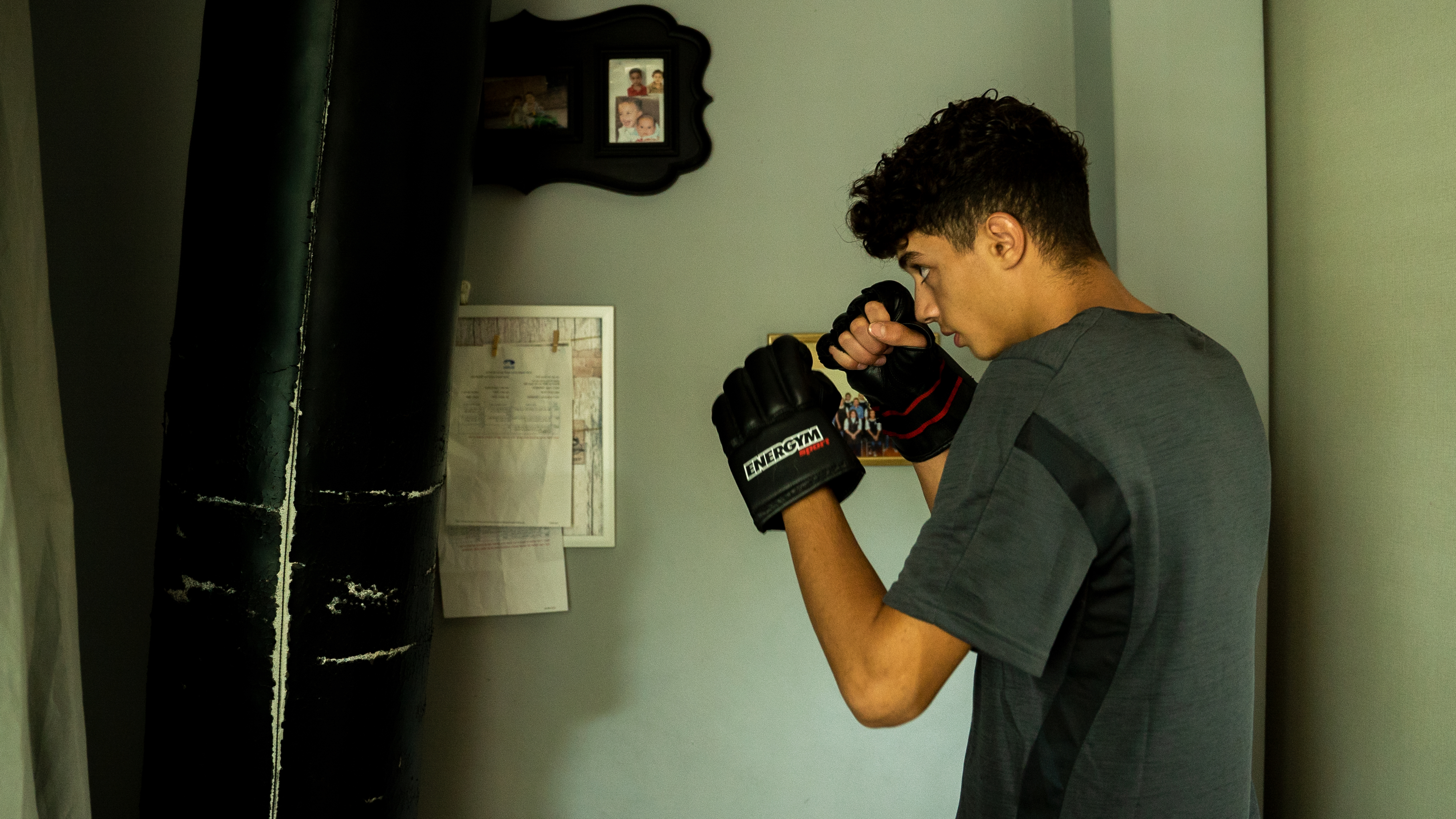 Part 4 What will the future bring?

Khalil anticipates that solidarity with the neighborhood will continue if a decision is actually issued to expel Sheikh Jarrah residents and that Israeli police will violently and brutally attack the solidarity activists. He also believes that there could be Israeli settler attacks on the community.

Despite the displays of solidarity, Khalil thinks that Nahalat Shimon, the right wing settlement foundation, will continue their efforts using all possible means to expel Palestinians in Sheikh Jarrah from their homes and gain control of the entire neighborhood. 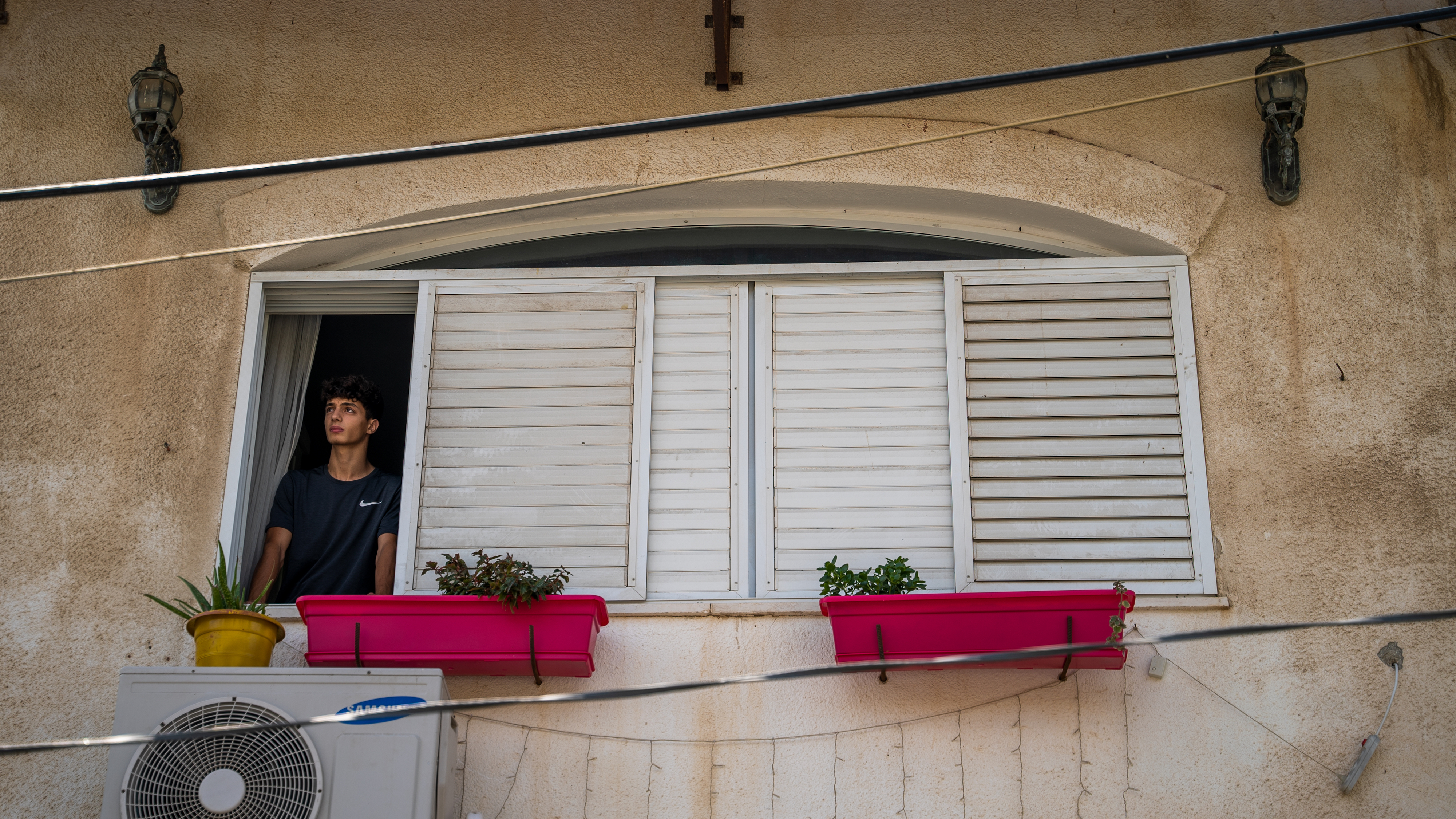 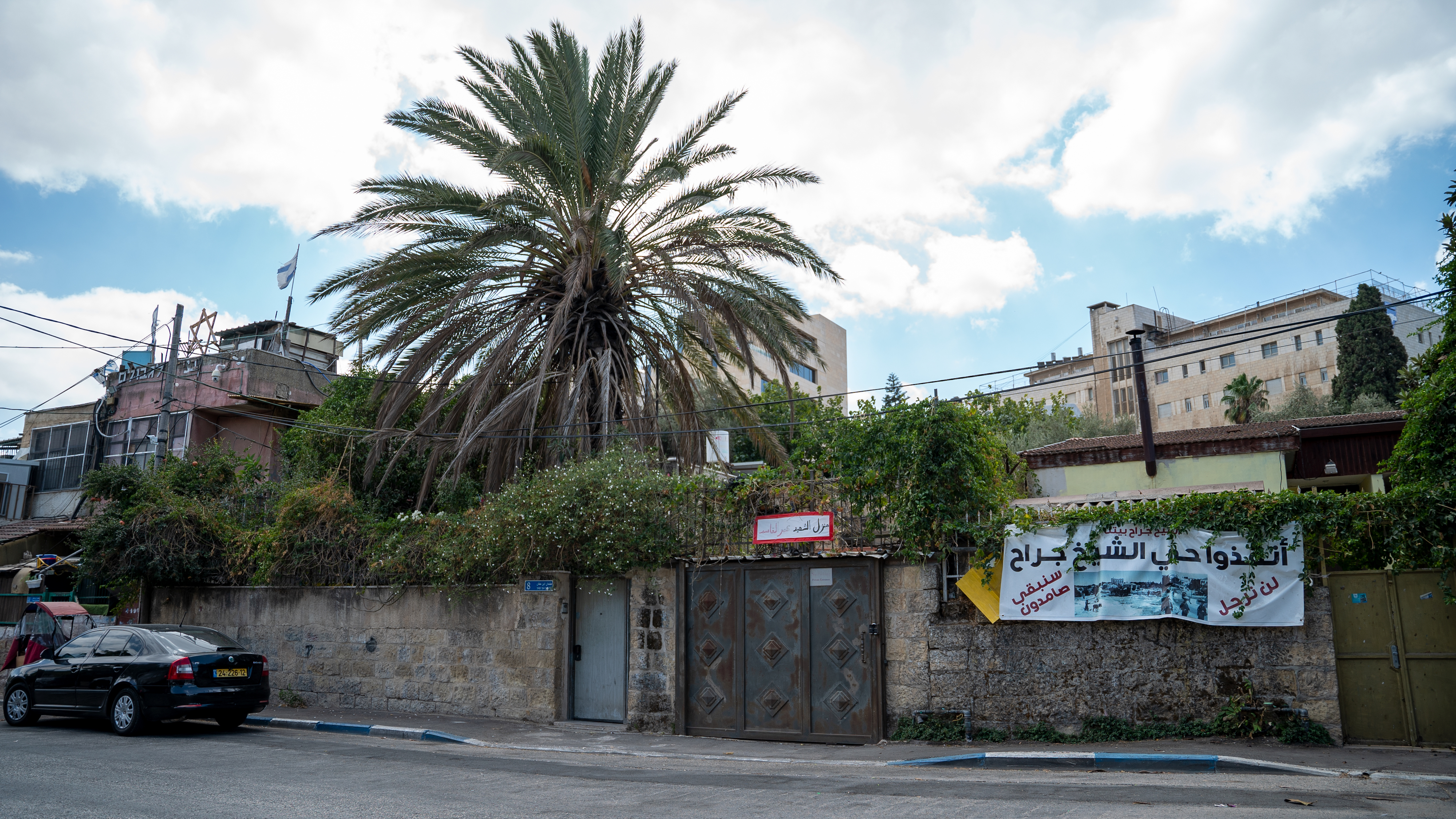 “I hope that the houses will not be evacuated at all and that the level of solidarity with the residents will be high,” Khalil said. “If they are able to evacuate the houses, it will be a catastrophe, and I do not imagine that life in the neighborhood will be comfortable and safe in light of the increasing number of settlers,” he added.

Right to a Childhood | News | Settler and Soldier Violence