Ramallah, March 10, 2020—UK Lawyers for Israel (UKLFI) recanted allegations that Defense for Children International – Palestine (DCIP) “provides any financial or material support to any terrorist organisation” in a statement on their website. DCIP reached a settlement in its defamation case against UKLFI on Monday.

The statement read: “In 2018 we wrote about Defense for Children International – Palestine and referred to links between some past board members and a designated terrorist organisation, the PFLP. We would like to clarify that we did not intend to suggest that the organisation has close current links, or provides any financial or material support to any terrorist organisation.” 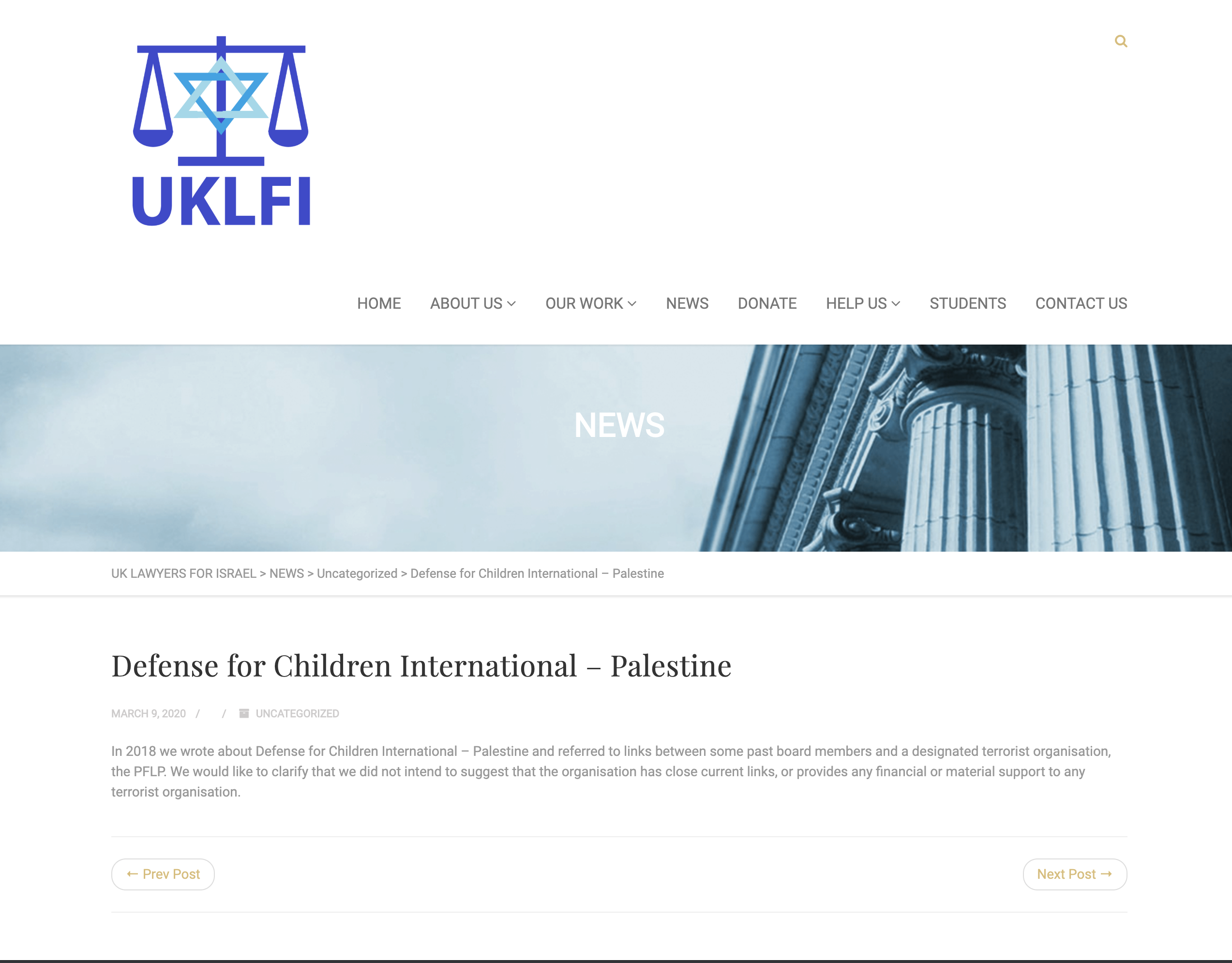 Since 2018, UKLFI has targeted DCIP through a well-orchestrated political and media misinformation campaign aimed at isolating it, seriously harming its reputation and integrity as a human rights organization, and preventing it from receiving charitable donations or raising funds.

In June 2019, DCIP, represented by Bindmans LLP, issued libel proceedings against UKLFI in London at the Royal Courts of Justice for publishing blog posts on their website and sending letters to institutional donors alleging DCIP had strong “links” to a designated terrorist group. UKLFI alleged that “donations to DCIP have encouraged and/or facilitated acts of terrorism” and threatened to report donors to relevant authorities if they did not cease providing DCIP with financial support.

We issued libel proceedings against UK Lawyers for Israel in UK courts in June 2019. Yesterday, as part of legal settlement, UKLFI recanted allegations that @DCIPalestine provides material support to any designated terror group.

A network of Israeli civil society organizations, with the support of the Israeli Ministry of Strategic Affairs and Public Diplomacy, have led targeted and organized defamation campaigns to delegitimize humanitarian and human rights organizations operating in the West Bank, including East Jerusalem, and the Gaza Strip.

While allegations made are unsubstantiated and distort critical factual or legal elements, they have nonetheless negatively impacted the ability of organizations to deliver critical assistance to Palestinians and advocate on behalf of their human rights.

"DCIP issued libel proceedings against UK Lawyers for Israel in the Royal Courts of Justice in relation to false allegations that DCIP has close current links to terror organizations and provides material support to terrorist groups," said Tamsin Allen, DCIP's solicitor at Bindmans LLP. "We are pleased to confirm that the case was settled at an early stage with UKLFI confirming that it did not intend to make any such allegations and publishing a statement to that effect."