Video: Bullet in the head 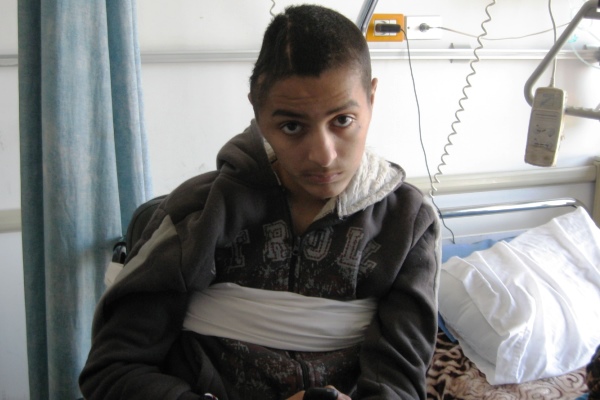 Odai, 15, chooses to fight the moment that changed his life forever by focusing on getting better.

Ramallah, 22 May 2013—On the evening of February 24, 15-year-old Odai Saleh and his younger brother, Amir, wound up in the middle of a confrontation between Palestinian protesters and Israeli soldiers. They were leaving Aida refugee camp on their way home to Bethlehem.

As the soldiers drew closer to the crowd, Amir ran for safety and then waited for his brother to join him. Two youths spotted Amir and told him his brother had been shot. He rushed back and saw Odai lying motionless on the ground.

Two soldiers dragged Odai to a military guard tower that overlooks the camp. An ambulance then transferred him to hospital. He had sustained a gunshot wound to the head. At first, the paramedics thought Odai was dead. For nearly three weeks, he remained in a coma at Hadassah Hospital.

Eyewitnesses told DCI-Palestine that neither Odai nor his brother participated in the clashes with Israeli soldiers.

With the rubber-coated bullet still lodged in his head, Odai now receives treatment at the Bethlehem Arab Society for Rehabilitation. The wound has left him with impaired physical and mental function. Odai’s grandparents, who raised him, have been constantly at his bedside. Their lives indefinitely placed on hold until he recovers.

Odai knows exactly what happened to him on that fateful day. He chooses to fight the moment that changed his life forever by focusing on getting better.