Ramallah, July 21, 2016—Tariq Hathaleen’s voice slows as he remembers the demolition that destroyed his home, eight years ago, when he was thirteen years old. “I was a child when the first demolition happened to my mother’s house.”

“It was a terrible experience. I will never forget the scene.”

Although English is Tariq’s second language, he conveys the complexity and gravity of home demolitions easily and with passion. Speaking to Defense for Children International - Palestine from his village, Um Al-Kheir, in the southern West Bank governorate of Hebron, Tariq explains that demolitions have been a regular occurrence in his village since  2007. The last demolition took place on April 6th. Six homes were destroyed, leaving 34 people homeless, including 12 children.

“It affects all of the other people who live in the village, and especially the children,” says Tariq. “There is a big harm that happens to children after every demolition.”

“If you rebuild your house in the same place, they[Israeli forces] demolish it immediately without giving notice. They do it without a demolition order,” says Tariq. “The 2014 demolition was the worst demolition that ever happened to the people of Um al-Kheir. Six houses were demolished that day, including my mother’s home.”

Tariq studies English Literature at Hebron University and spends his weekends working with Ta’ayush, an Israeli - Palestinian grassroots partnership working to achieve peace and civil equality. Each Saturday, Tariq visits communities in the south Hebron hills and delivers talks about coping with demolitions. As a young activist who has experienced demolition first hand, Tariq can attest to their impact on children.

“This is the main problem that we are facing from a demolition,” says Tariq. “Our children are suffering terribly. They run away when they see the bulldozers entering the village. When they see the soldiers with a lot of weapons, they start crying.”

Tariq claims that it takes children much longer than adults to shake off the emotional stress of having their home demolished.

“When he saw anybody, a stranger, a visitor, he quickly ran away to hide himself because he thought this person will demolish his house. This child was lost. It took my uncle two years to make Mohammed the same child he was at the age of three or four. It was a strain on my uncle and Mohammed. But now he acts normally and plays with other children.”

Israel routinely demolishes and dismantles Palestinians homes for punitive purposes, and a lack of building permits, throughout the West Bank, including East Jerusalem.

Building permits and restrictions are of particular concern for Palestinians living in Israeli-controlled Area C, where Um Al-Kheir is located, and which accounts for approximately 60 percent of all the land in the West Bank.  The demarkation of all but a third of Area C for firing zones, nature reserves, state lands, and Jewish settlement expansion is a part of Israel’s planning policy that OCHA recently described as unlawful and discriminatory zoning, and leaves little liveable space for Palestinians.

Since Palestinian building permits are rarely approved, many families live in structures without the necessary permits, under constant risk of demolition and homelessness.

“The only reason for the demolitions in Um Al-Kheir is that the houses are considered illegal,” says Tariq, who says that attempts to appeal demolition orders in Um Al-Kheir with Israeli authorities have proven futile.

Home demolitions for the purpose of settlement expansion and their associated infrastructure have also impacted families in East Jerusalem. In 2001, Rajeh H. built his home on a piece of land in a residential area in the East Jerusalem neighborhood of Shu’fat.  Rajeh purchased the land and applied for a permit before he started construction.

“I was shocked when I received a house demolition order from the Jerusalem municipality without explaining why the house would be demolished,” says Rajeh, a paramedic at the Palestinian Red Crescent Society and father of five.

Between 2012 and May 2016, Rajeh frequently appeared in court, and managed to postpone numerous demolition orders. Eventually, Rajeh’s efforts were not enough to save his home.  On May 1, the court refused to extend the demolition date, and Rajeh was told that his home would be demolished in order to complete construction of a road connecting the illegal settlements of Ramot and Pisgat Ze’ev.

“Since May 1 until May 18, we had been living in anxiety, tension and dread,” says Rajeh. “My son, Majd [10], was very nervous and always asked questions about the house and what would happen to us if the house was demolished. I sensed fear in his eyes. He was very sad because he was very attached to his room and the playground in front of the house.”

Early on May 18, some 30 Israeli soldiers raided Rajeh’s home and ordered the family to leave. The house was demolished immediately, and Rajeh moved his family to his brother’s home in a neighboring East Jerusalem neighborhood, Anata, where he now rents a house.

“I hope that we will overcome this calamity. I wish we could go back to our house in Shu'fat, where I was born and had dreams with my wife and my children.” 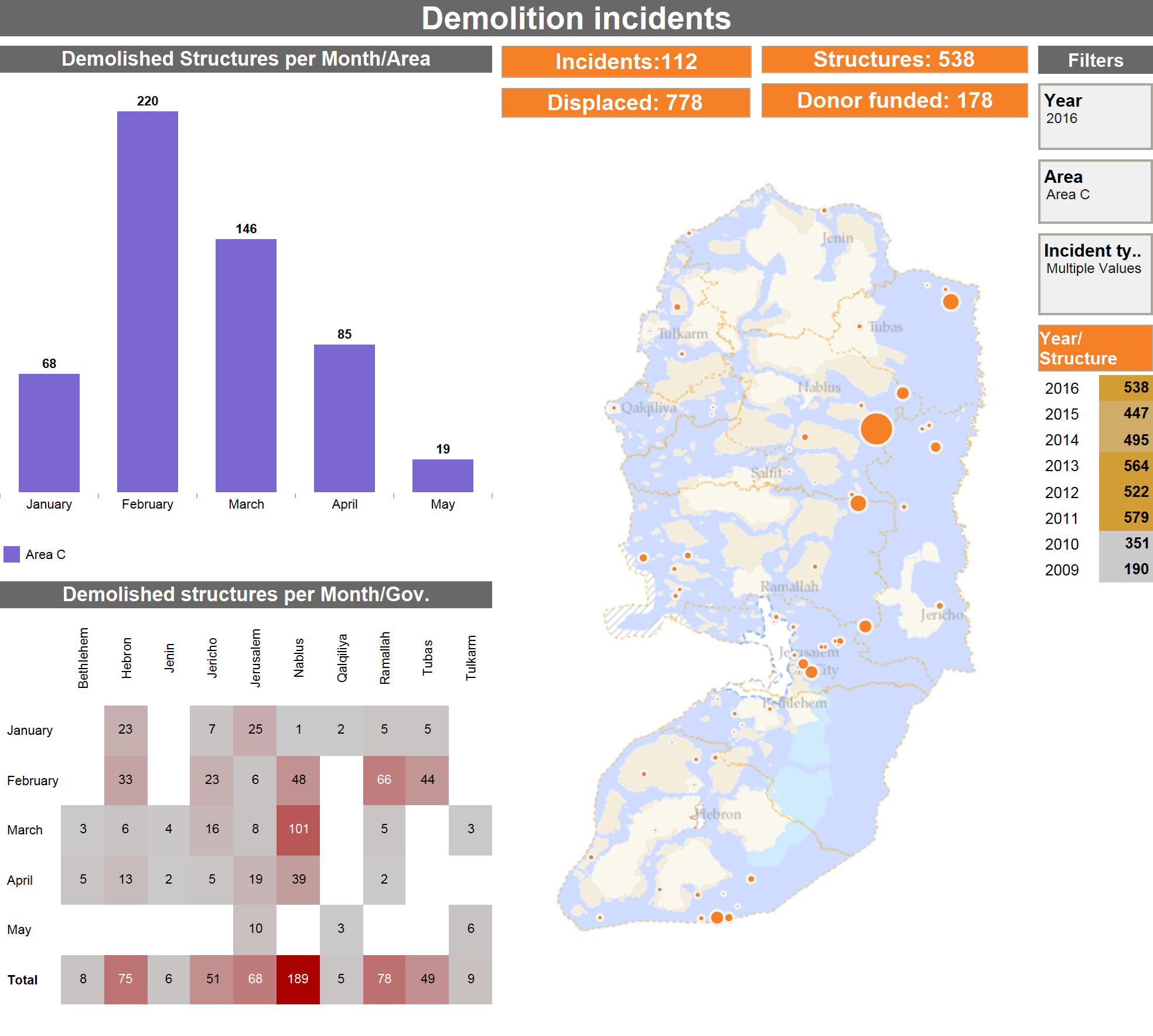 The United Nations reports that from January to April 2016, 598 Palestinian owned structures in Area C were demolished, dismantled or confiscated by Israel, displacing 858 Palestinians, including an estimated 416 children. This stands in contrast to 2015, during which 548 structures were demolished overall, suggesting an escalation in demolitions.

Since 1967, Israel has pursued a policy of demolishing homes and essential structures such as water systems and livestock pens throughout the West Bank and East Jerusalem, demolishing an estimated 48,000 Palestinians structures, of which 24,000 are estimated to be homes.

Under international humanitarian law, Israel has obligations toward Palestinian civilians. Its demolitions are in violation of The Hague and Fourth Geneva Conventions, which state that an occupying power cannot destroy or seize property on the territory it occupies.

“These demolitions deny Palestinians their right to live securely," said Ayed Abu Eqtaish, Accountability Program director at DCIP. "In denying Palestinians building permits and demolishing their homes and other essential structures, Israel is violating international laws that protect the rights of children to an adequate standard of living, education, health and psychological well-being.”