Part 1 "Our homes were demolished before our eyes."

Ramallah, April 8, 2021 — Israeli forces demolished and seized Palestinian-owned structures in the same community in the northern Jordan Valley in the occupied West Bank at least seven times since 2014, including six times since November 3, 2020. Palestinian children and their families from the Bedouin community of  Humsa Al-Bqai’a, also known as Khirbet Humsa Al-Fouqa, faced much of the winter in the cold without shelter.

“Our homes were demolished before our eyes. We were helpless,” said 16-year-old Amro K. “Women and children were crying nonstop.”

On November 3, 2020, six Israeli military bulldozers arrived at Amro’s home in Humsa Al-Bqai’a in the northern Jordan Valley and razed residential tents and tin sheds, livestock pens and barns, portable toilets and water tanks as well as solar panels. The demolitions displaced 11 families consisting of 72 people, including 38 children, according to documentation collected by DCIP.

The destruction of property in an occupied territory is prohibited under international humanitarian law, unless absolutely necessary for military operations.

Palestinian properties are subject to demolition or confiscation as part of Israeli-imposed planning and zoning regimes in Area C and East Jerusalem and other parts of the West Bank.

The UN Office for the Coordination of Humanitarian Affairs (OCHA) described the incident as the largest demolition in years. In addition to the destruction of the community’s property, Israeli forces also seized two tractors and one private car.

Palestinians are required to obtain Israeli-issued building permits and the lack of permits is typically cited as the reason for demolitions or confiscations, even though, due to the restrictive and discriminatory Israeli planning regime, Palestinians are overwhelmingly denied permits and therefore forced to build without the necessary permits, according to Diakonia.

“My cousins and I were feeding our sheep when a convoy of Israeli military vehicles followed by six bulldozers drove towards us,” recounted Amro. “At first, I thought they wanted to evacuate us to conduct training exercises. Other children and I were really scared as they approached us.”

The families were given only three minutes to empty their homes of their belongings and to evacuate their sheep from their pens and barracks. According to the residents, Israeli authorities did not notify them of the demolitions ahead of time.

“Given only three minutes, we managed to take out only the most important stuff like mattresses, food, and kitchenware. The rest was left behind and destroyed under the rubble,” said Amro.

Israeli bulldozers demolished Humsa Al-Bqai’a in four hours, according to information collected by DCIP. The community is located in land designated as Area C of the occupied West Bank.

The Oslo II Accords in 1995 divided the West Bank into three sections. The most populated parts of the West Bank, including major cities, are in Areas A and B, and are under the civil control of the Palestinian Authority. Area C, which includes most of the Jordan Valley and Dead Sea area as well as other rural areas, makes up 60 percent of the West Bank, is under Israeli civil control. Despite this agreement, Israel remains the Occupying Power under international humanitarian law and maintains ultimate control over the entirety of the occupied West Bank.

Virtually all of Area C is prohibited for Palestinian use, earmarked instead for the use of the Israeli military or under the jurisdiction of Israeli settlements, according to OCHA.

“After Israeli forces left the area, we tried to take out what was left of our stuff under the rubble and repair what could be fixed,” Amro told DCIP.

Since the November 3 demolition, residents, with support from humanitarian organizations, have rebuilt their community. But Israeli authorities have targeted Humsa Al-Bqai’a five more times since November, demolishing Palestinian-owned and donor-funded structures and seizing property and land.

Palestinian children in Khan al-Ahmar, a Bedouin village between Jerusalem and Jericho in the occupied West Bank, share their experiences living in a village that Israeli authorities are threatening to demolish.

Roughly 6,200 Palestinians live in these Israeli closed military zones, the majority of whom are indigenous Bedouin and other shepherding communities who have lived there for generations.

Humsa Al-Bqai’a is one of 38 Bedouin and herding communities located within firing zones unilaterally established by Israel. Israeli forces use this land for military training, often deploying live ammunition and explosive devices. Israeli forces frequently displace Palestinian families from this land, often by dismantling and destroying their homes.

Since Israel occupied the West Bank in 1967, Israeli authorities have pursued a discriminatory policy of demolishing Palestinian homes and essential structures, including water systems, livestock pens, solar panels, and even tents and shelters provided by international aid organizations across the West Bank, including East Jerusalem.

The northern Jordan Valley consists of 23 Palestinian communities, within which reside around 11,500 people. Israeli forces have demolished a total of 214 structures in the northern Jordan Valley between January 2020 and March 2021, according to data from OCHA. These demolitions displaced 361 Palestinian people, including 202 children. OCHA reported Israeli authorities demolished or seized 848 Palestinian structures in 2020 alone, the highest annual number recorded since 2016.

The Jordan Valley makes up 60 percent of the occupied West Bank, though 94 percent of the land is considered off-limits to Palestinians, including Bedouin and herding communities, due to closed Israeli military areas, Israeli nature reserves, illegal Israeli settlements, and the near impossibility of obtaining permits to build in Area C, which accounts for 87% of the Jordan Valley, according to OCHA.

Israeli government officials, including Prime Minister Benjamin Netanyahu pledged in 2020 that the Jordan Valley will remain under Israeli control and become part of Israel’s eastern border. 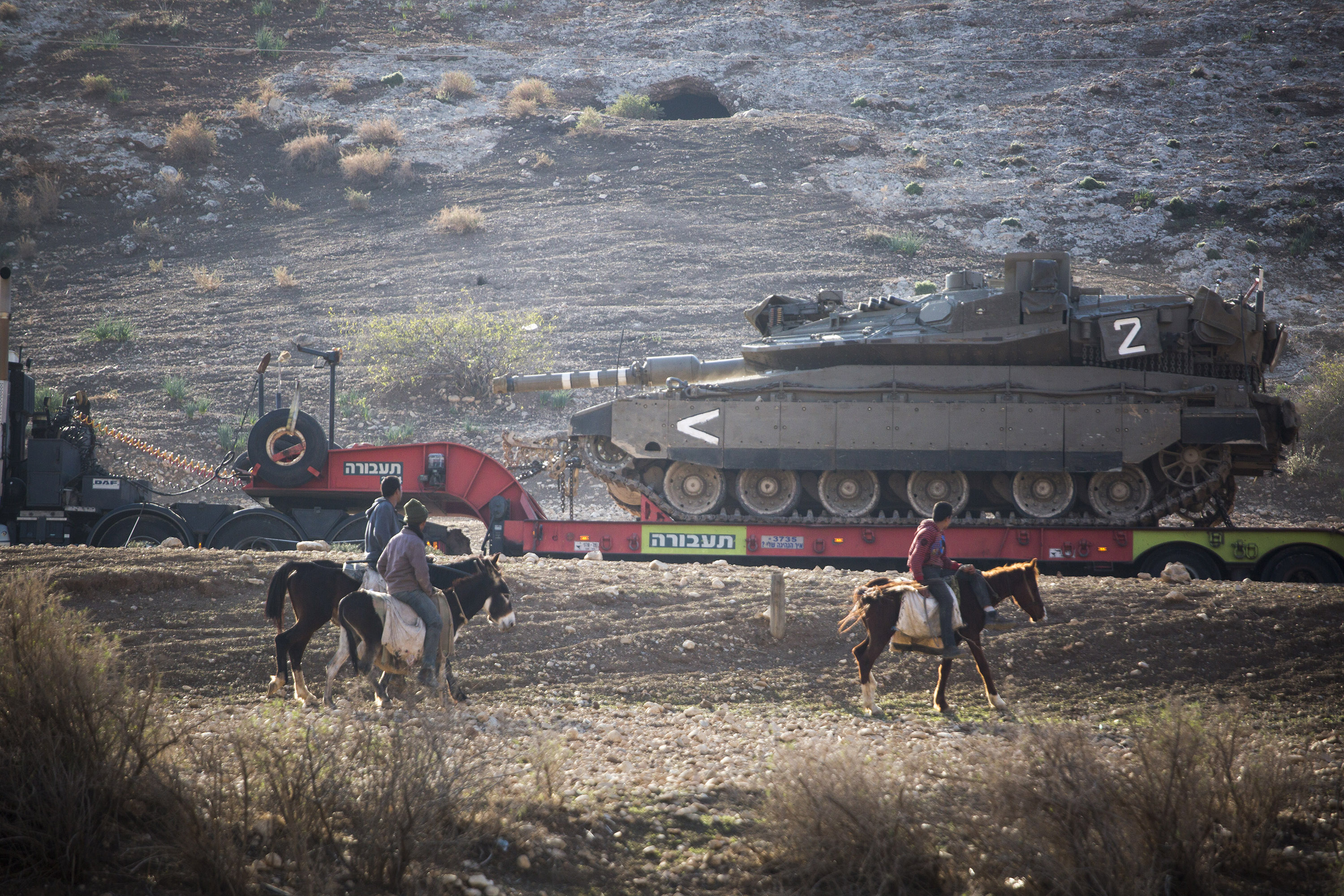 Part 2 "Every time we rebuild, the Israelis come and demolish."

Israeli authorities have targeted many other Palestinian communities in the northern Jordan Valley for demolition. On September 9, 2020, two Israeli bulldozers accompanied by ten military vehicles demolished the homes of two Palestinian families in Khirbet Yarza, a village six kilometers (3.75 miles) east of Tubas.

Khirbet Yarza is one of many vulnerable northern Jordan Valley villages. It is home to 12 families consisting of 70 people.

“We received a demolition notice 96 hours prior to the incident,” Hafez Masa’eed told DCIP. ”We were able to remove all of our belongings and stuff from the houses. During the demolition my children were at school, except for my three-year-old daughter, Saja, who witnessed it and was crying the whole time.”

Israeli authorities told the Masa’eed brothers that they considered the land upon which their homes were built to be of archaeological significance and, as such, the construction of homes was prohibited.

“This house was built in the 1980s,” Hafez told DCIP. “I have all the papers proving that I own the land, and I have tried many times to obtain a permit to build, yet I never get the approval.”

Israeli authorities reject the overwhelming majority of applications for the necessary building permits by Palestinians in Area C, which comprises 60 percent of the West Bank. Consequently, many Palestinians are forced to build homes without permits, which is a criminal offense under Israel’s Planning and Building Law 1965, leaving these homes at constant risk of demolition.

For now, Hafez Masa’eed and his family are staying with extended family.

“We do not know what we will do next,” he told DCIP. “Every time we rebuild, the Israelis come and demolish.”

Ahmad, his 10-year-old son, told DCIP that he was at school when the house was demolished.

”When I came home from school, I didn’t see my house. I ran toward it to see it was wrecked. I felt very sad and scared,” Ahmad said.

According to Ahmad’s mother, the night after the demolition was very difficult for the children, who had trouble sleeping. 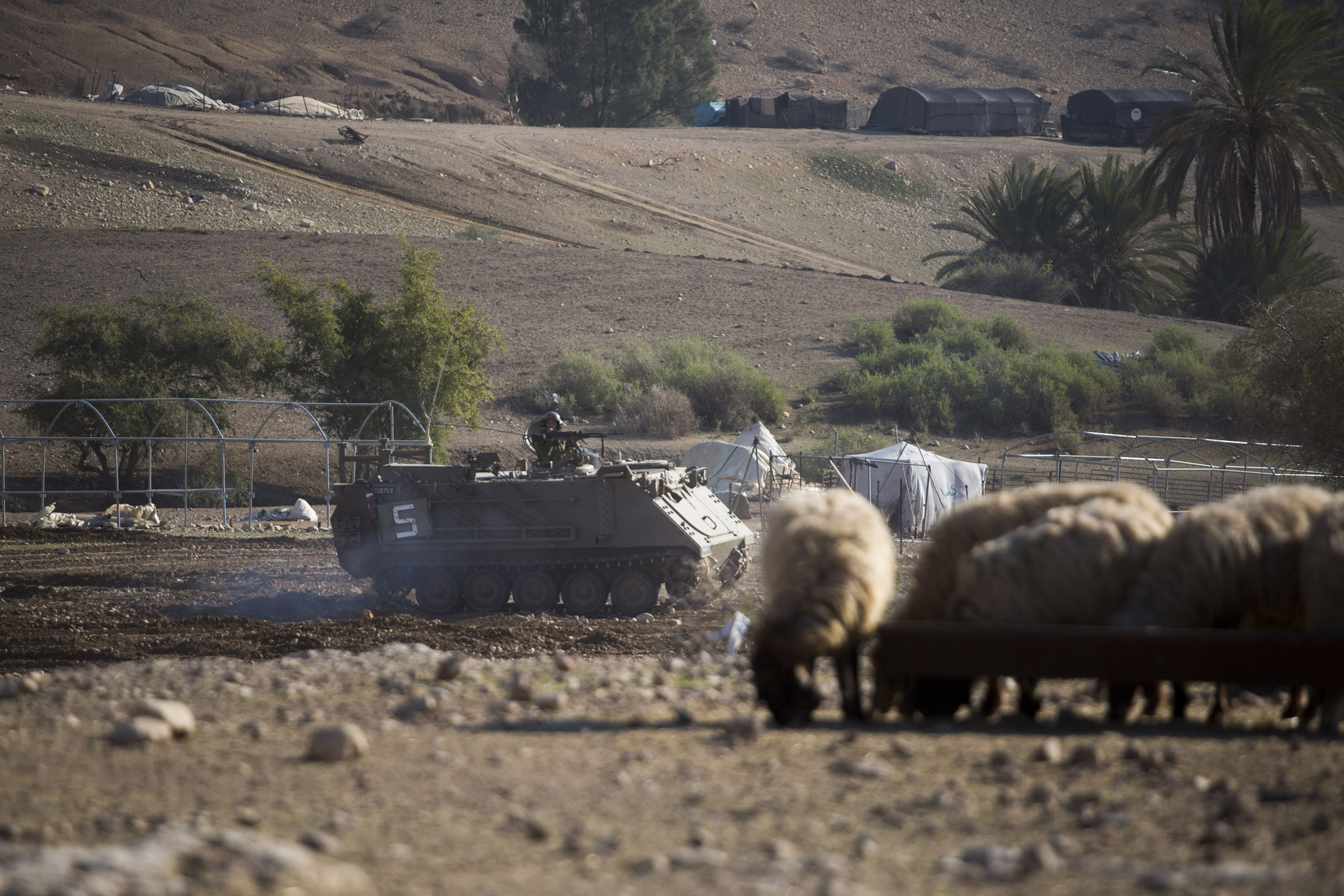 DCIP also documented an incident in which Israeli forces demolished tin structures in Al-Farisiya Khallet Khader on October 19, 2020. The structures belonged to Raddad Daraghme, whose car was seized by Israeli authorities during the demolition.

Like Humsa Al-Bqai’a, Al-Farisiya Khallet Khader is a small Palestinian village in the northern Jordan Valley located inside an Israeli closed military zone.

“I received a 96-hour notice to take my belongings out of the structures and to find a new place for my family,” Daraghme told DCIP.

“I was told that I do not have a building permit. The process to obtain a building permit is really complicated, and in almost all cases people do not obtain them. This is my land, and I provided the Israeli authorities with all the deeds, yet I wasn’t allowed to obtain the permit,” Daraghme added.

Daraghme and his wife, who had been living there for a year, sent their two children, aged one and two, to stay with their grandparents so that they did not witness the demolition.

On the morning of the October 2020 demolition, Israeli forces raided Daraghme’s’s home while he was playing with his daughters. The forces examined and photographed the area, frightening Daraghme’s two-year-old daughter.

The psychological impact of home demolitions upon families and their children can be severe. Long periods of instability typically follow a demolition, including the destruction of normal family life and routines, and the disruption of schooling. A child’s mental health is also profoundly affected by the psychological health of their parents, which can be compromised following a demolition.

Some children and adolescents experience developmental regression following a home demolition, according to Médecins Sans Frontières (MSF). This can include bedwetting, as well as behavioral changes and concentration problems. The most common disorders observed in the weeks following a demolition are anxiety, depression and post-traumatic stress disorder.

Demolishing Palestinian homes and property amounts to violations of Israel’s obligations under both international human rights and humanitarian law.

Article 27 of The United Nations Convention on the Rights of the Child (CRC) requires state parties to “recognize the right of every child to a standard of living adequate for the child’s physical, mental, spiritual, moral and social development.” Article 16 of the CRC prohibits states from subjecting a child to arbitrary or unlawful interference with his or her privacy, family, home or correspondence. Despite ratifying the CRC in 1991, Israeli authorities persistently violate the rights of Palestinian children to have an adequate standard of living and be free of interference with their family and home. 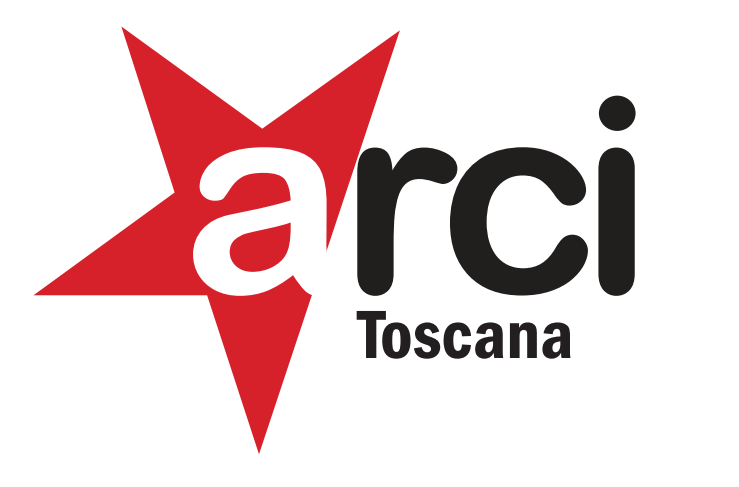