Naseem Abu Rumi was 14 at the time he was killed by responding Israeli police officers. (Photo: Courtesy of the Abu Rumi family.)

Ramallah, August 27, 2019—Israeli police officers killed one Palestinian boy and and critically injured a second moments after the two reportedly stabbed and injured an on-duty Israeli policeman in the Old City of Jerusalem on Thursday evening, August 15.

Footage widely published last week shows two boys committing a stabbing attack near the Chain Gate in Jerusalem and Israeli police officers respond by opening fire on the boys. The victim, a policeman, survived the attack with minor injuries, according to local media reports. Naseem Abu Rumi, 14, was killed on the scene and the other teenage boy was injured. Defense for Children International - Palestine has been unable to identify any eyewitnesses to the incident thus far.

“At around 9:30 p.m., I received a call from an Israeli intelligence officer who asked me to come to Al-Zaytoun crossing but refused to tell me what it was about over the phone,” said Naseem’s father. “At Al-Zaytoun crossing, I was questioned until two in the morning,” he said.

Naseem’s father told DCIP that he had no knowledge of his son’s intentions or actions that day, and that his son’s body is being withheld by Israeli authorities.

Of the 17 Palestinian children killed by Israeli forces so far this year, only one other child was reportedly involved in carrying out an attack at the time Israeli forces killed him. On January 30, Israeli forces shot Samah Zuheer Ahmad Mubarak, 16, at close range at a checkpoint outside of Jerusalem, after an alleged attempted stabbing attack. 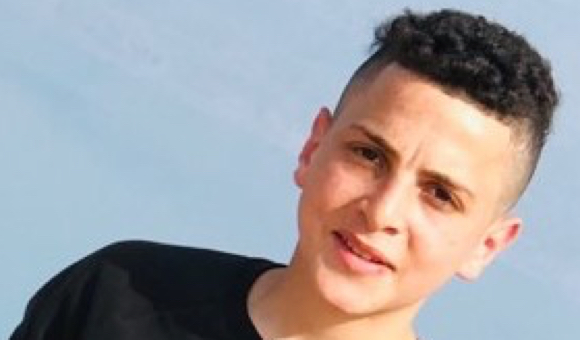 Earlier this year, Israeli forces used unlawful force against Abdullah Luai Ghaith on May 31, 2019, killing him when he crossed through the Israeli-installed separation barrier.

Around 8 a.m. that morning, the 15-year-old, from the southern West Bank city of Hebron, and some other family members decided to go to Al-Aqsa mosque in Jerusalem to perform prayers during Ramadan.  In order to enter Jerusalem, Palestinian residents of the West Bank must have Israeli permits. Abdullah had a permit but was trying to help his cousin enter Jerusalem without a permit by crossing through the separation barrier, the boy’s father, Luai Ghaith, told DCIP.

“My son, Abdullah, went through the hole in the fence to the second fence, about three to four meters [10 - 13 feet] away. Suddenly, I heard gunfire and saw him running toward me and falling to the ground on his face,” said Ghaith.

Ghaith drove Abdullah to Al-Hussein hospital in Beit Jala, where the boy was pronounced dead.

Lethal force must only be utilized as a last resort according to international law, when there exists a direct threat to life or of serious injury.