Rashid Mohammad Rashid Abu Arra, 16, was shot dead by Israeli forces with live ammunition early Wednesday morning in the village of Aqaba, located northwest of Tubas in the occupied West Bank. He was shot from behind and sustained two gunshot wounds to the upper and middle back, according to documentation collected by Defense for Children International - Palestine. The killing occurred as Israeli forces entered the village during the early morning to conduct search and arrest operations.

Around 6:30 a.m., Rashid, his father, brother, and another individual arrived at Aqaba, returning from Nablus with produce for local vendors to sell in the village, an eyewitness told DCIP. They encountered four Israeli military vehicles deployed on Aqaba’s main road.

Rashid approached the area where the Israeli military vehicles were parked. He and a few others threw stones at the back of the military vehicles, the eyewitness told DCIP. Almost immediately, Israeli forces in one vehicle began driving in reverse. Israeli forces opened the vehicle’s rear door and fired three live bullets at the group as Rashid and the others turned and attempted to flee. Rashid was struck in the back with two live rounds from a distance of approximately 15 meters (50 feet), according to information collected by DCIP.

Rashid managed to run about 20 meters (65 feet) and, bleeding from his neck, collapsed in front of his father’s vegetable shop.

He was transported to Tubas hospital by car with his parents at his side. He lost consciousness while en route. Rashid was taken to the emergency room where doctors attempted to resuscitate him for 20 minutes but failed and later pronounced him dead. 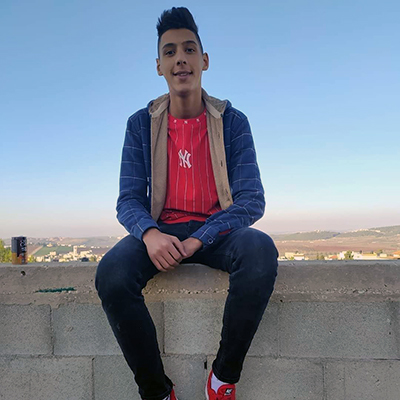 “Israeli soldiers and police use excessive force systematically and with almost complete impunity against Palestinian children,” said Ayed Abu Eqtaish, accountability program director at DCIP. “As long as systemic impunity is the norm and the international community remains complicit, Israeli forces will continue to carry out extrajudicial and unlawful killings against Palestinian children.”

Israeli forces also shot and killed 17-year-old Bashar Ahmad Ibrahim Samour yesterday morning near the Gaza perimeter fence east of Khan Younis in the southern Gaza Strip. Israeli forces deployed on the opposite side of the perimeter fence shot and killed Bashar around 10 a.m. Bashar sustained two gunshot wounds to the right side of his chest, according to documentation collected by DCIP. He worked as a farmer and was connecting irrigation pipes about 500 meters (1640 feet) from the fence when he was shot and killed.

Rashid is the third child killed by Israeli forces with live ammunition in the occupied West Bank this year. Last week, Israeli forces shot and killed 16-year-old Said Yousef Mohammad Odeh in Odala, a village located south of Nablus in the northern West Bank. Israeli forces reportedly confronted Palestinian youth at the village entrance prior to the shooting. Said was not involved in the confrontations at the time he was shot, according to information collected by DCIP.