15-year-old Tareq Z. was abducted and assaulted by Israeli settlers in Homesh, an evacuated settlement south of Jenin in the occupied West Bank on August 17. (Photo Credit: DCIP / Ahmad Al-Bazz)

Israeli settlers abducted and assaulted 15-year-old Tareq Z. on August 17 near Homesh, an evacuated Israeli settlement located south of the occupied West Bank city of Jenin. The settlers pursued and struck Tareq with their car, tied him to the vehicle’s hood, hung him by his arms from a tree, and beat him until he lost consciousness, according to information collected by Defense for Children International - Palestine. He awoke inside an Israeli military vehicle and was subsequently taken by a Palestinian ambulance to the Jenin governmental hospital where he was treated for his injuries including a fractured knee, according to documentation collected by DCIP.

Tareq and five friends set off around 9 a.m. to picnic in an area of their village, Silat Ad-Dhaher, adjacent to Homesh, a former Israeli settlement that was evacuated in 2005. Shortly after the boys’ arrival, they heard voices speaking in Hebrew and saw two Israeli settlers in civilian clothes walking nearby. One of the settlers was armed with a handgun, according to information gathered by DCIP. Frightened, the boys fled. Tareq’s friends managed to escape through nearby fields, but the settlers chased Tareq in their car down an agricultural road and abducted and physically assaulted him.

“We have documented a sharp increase in the number of Israeli settler attacks on Palestinian children this year, and attacks are increasingly severe,” said Ayed Abu Eqtaish, accountability program director at DCIP. “Israeli authorities persistently fail to investigate settler violence against Palestinian children, and that lack of accountability has undoubtedly led to Israeli settlers becoming more brazen and brutal in their attacks.”

Tareq Z., 15, recounts his abduction and assault at the hands of Israeli settlers in Homesh on August 17, 2021.

The settlers chased Tareq in their car as he ran down an agricultural road. After striking him with their car, they beat him with wooden sticks as he lay on the ground, according to information gathered by DCIP. After that, two other settlers brought ropes from inside the car, tied Tareq’s hands and feet, carried him and sat him on the hood of their car. The settlers tied the ropes with long metal chains, and they got into the car, holding the metal chains from the windows, and drove to the settlement ruins with Tareq pinned to the hood. When the driver hit the brakes, those holding onto the metal chains let go of them and Tareq fell to the ground.

“I looked around and saw around 70 settlers. Once they saw me, one of them hit me more than once with a metal bar on my back and legs,” Tareq recounted to a DCIP field researcher. “Then another settler came towards me and pepper sprayed me, while I was screaming and hurting. I was really scared.”

The settlers blindfolded Tareq and tied his hands behind his back with a plastic cord. He remained immobilized as the settlers hit, kicked, slapped and spat on him for around 90 minutes, according to information collected by DCIP. The settlers also hung Tareq from a tree with his feet unable to reach the ground. One of the settlers tased Tareq with an electrified baton, scratched his foot with a sharp object, and burned the sole of his right foot, according to information collected by DCIP. 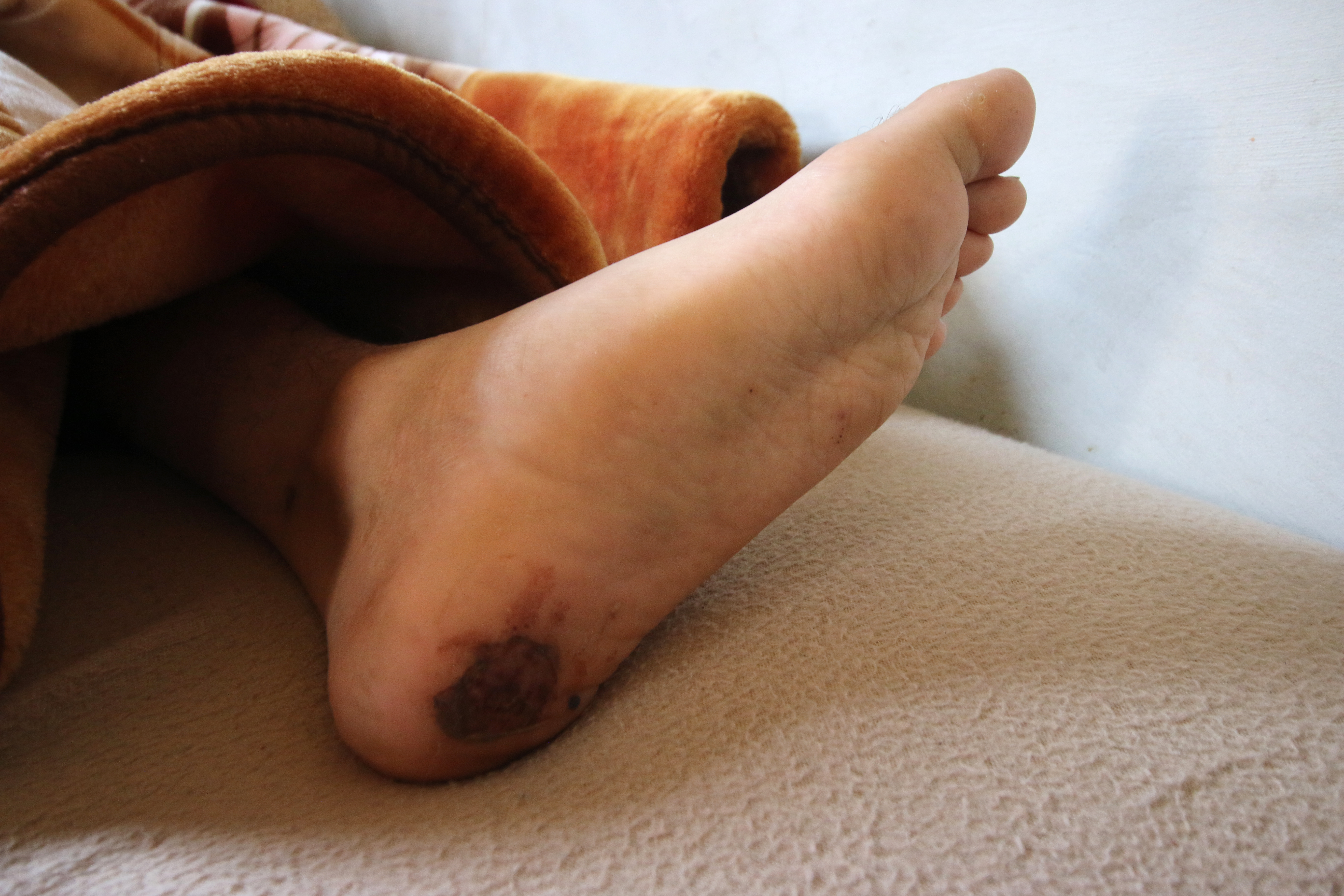 When he was released from the tree, a settler struck Tareq in the head with a wooden stick and threw him onto a cactus. Tareq lost consciousness and later awoke inside an Israeli military jeep.

After learning about Tareq’s abduction from his friends, Tareq’s family contacted Palestinian authorities. They contacted Israeli authorities that deployed Israeli forces to the area, eventually finding Tareq. The Israeli soldiers brought Tareq to the entrance of an Israeli settlement.

After an hour, Tareq was met by his uncle and a Palestinian ambulance that transported him to the Jenin governmental hospital where he was examined and x-rayed, according to information collected by DCIP.

Tareq sustained bruises and scratches all over his body, in addition to a knee fracture. The sole of his left foot was also wounded and bleeding. He was discharged from the hospital the following day. 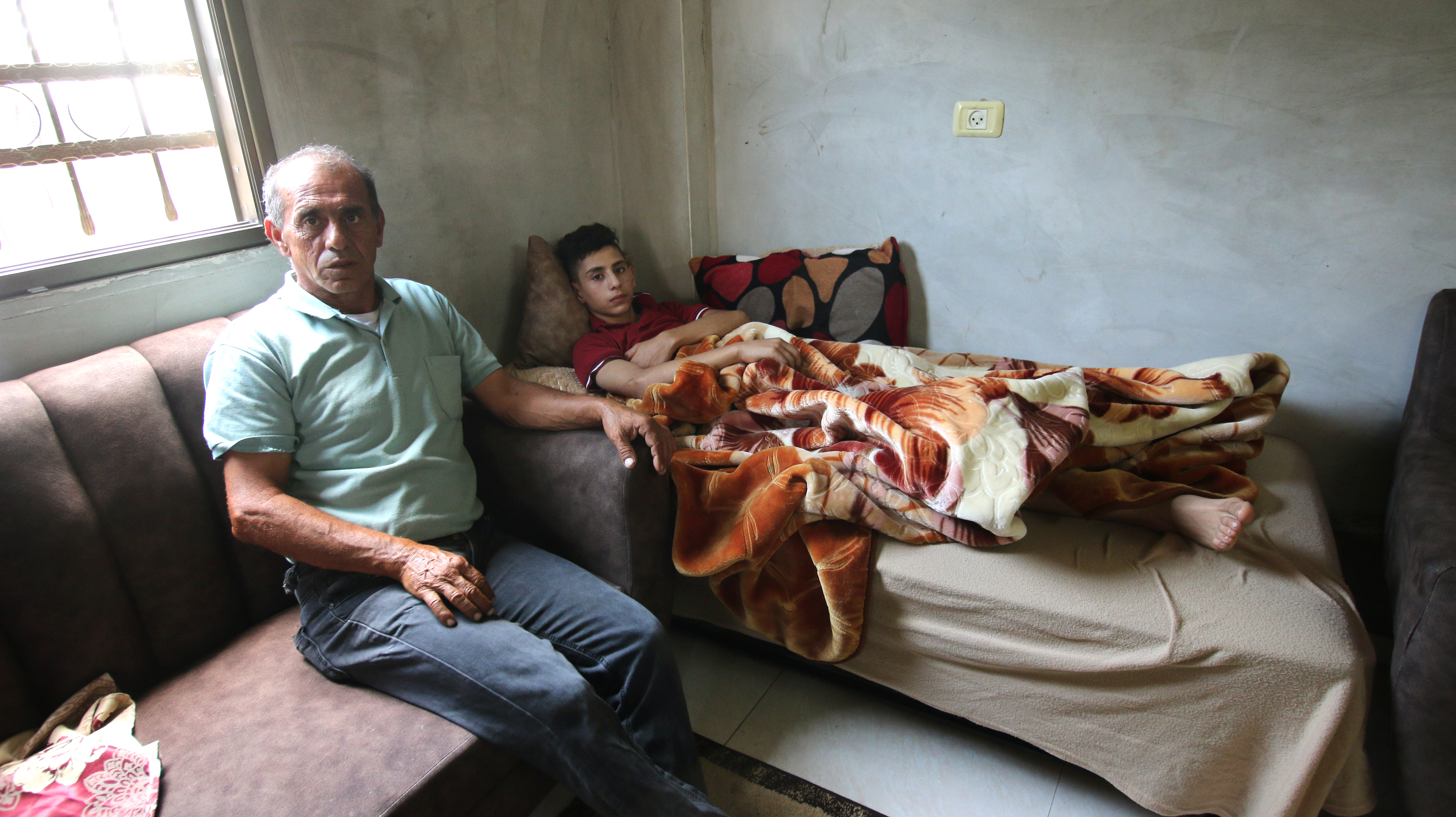 Although Homesh was officially evacuated in 2005, a group called Homesh First established a Jewish seminary at the site soon after the evacuation, according to Haaretz. The Israeli settlers there are known to be extremely violent, Haaretz reported.

Israeli authorities consistently fail to investigate complaints filed against settlers. According to Yesh Din, between 2005-2019, 82 percent of investigative files on ideological crimes against Palestinians were closed due to police failures.

Article 49 of the Fourth Geneva Convention prohibits Israel, the Occupying Power, from transferring its civilians to the Occupied Palestinian Territory. It also prohibits Israel from transferring Palestinians, the protected population, unless necessary for the protected population’s security or out of military necessity. Violations of Article 49 are grave violations of international humanitarian law and amount to war crimes.

The United Nations Security Council reaffirmed the prohibition on establishing settlements in Security Council Resolutions 446, 452, 465, and most recently, 2334. Despite this prohibition, Israel began establishing Jewish-only settlements for Israeli civilians shortly after it occupied the West Bank, including East Jerusalem, and the Gaza Strip in 1967. Israeli authorities frequently displace Palestinian communities and appropriate Palestinian lands to establish these Jewish-only settlements.