Mohammad Abu Rukbeh is a senior field researcher for Defense for Children International - Palestine in the Gaza Strip, where he lives with his wife, Maisa, and their three children. (Photo credit: DCIP / Mohammad Abu Rukbeh)

Jabalia, May 24, 2021 — “I would like you to understand that while I am writing this statement, the sound of the Israeli planes roaming the sky of the Gaza Strip, and the sounds of their missiles are spreading terror in every house, neighborhood, and city,” said Mohammad Abu Rukbeh, a field researcher at Defense for Children International - Palestine (DCIP).

Mohammad and his family live in Jabalia refugee camp in the northern part of the Gaza Strip.

As a father of three children between seven and 11 years old, with one more on the way, Mohammad struggles to explain the Israeli bombardment of the Gaza Strip to his kids.

“A state of hopelessness and helplessness afflicts me as a father. I try to reassure my children that the Israeli strikes will not reach us and that our home is safe. As my children get older, reassuring them no longer helps,” he said. “They always ask me about the bombing and the destruction, asking, 'Where did it take place? Was it an Israeli F16 missile? A drone missile? A local rocket?'

As DCIP’s full-time field researcher in the Gaza Strip, Mohammad has documented all 67 Palestinian children killed there since hostilities between Israeli forces and Palestinian armed groups escalated on May 10.

While Israeli and Palestinian officials reached a ceasefire agreement that took effect on May 21, 2021, this wasn't the first time Israeli bombs rained on the Gaza Strip, and it likely won't be the last. Mohammad is experienced in documenting Palestinian child fatalities during Israeli military bombardments on Gaza and shared the toll the past 11-day bombardment took on him and his family.

“Despite my experience in dealing with repeated Israeli attacks against Gaza due to the nature of my work with DCIP, every time there is an Israeli attack against Gaza, I find myself unable to provide a safe place for my children,” Mohammad added. “This is simply because the Israeli bombing in my residential area terrifies us all, adults and children alike.”

Mohammad began volunteering with DCIP in 2003 and joined full-time in 2006, meaning he has documented more than a thousand Palestinian child fatalities and hundreds more injuries in the Gaza Strip. At 41 years old, he has lived and worked through several major Israeli military offensives on Gaza: Operation Warm Winter in early 2008, Operation Cast Lead in 2008-2009, Operation Pillar of Defense in 2012, Operation Protective Edge in 2014, and now Operation Guardian of the Walls in 2021.

For a typical day of work during an Israeli military offensive against Gaza, Mohammad is busy, but his children are always on his mind. 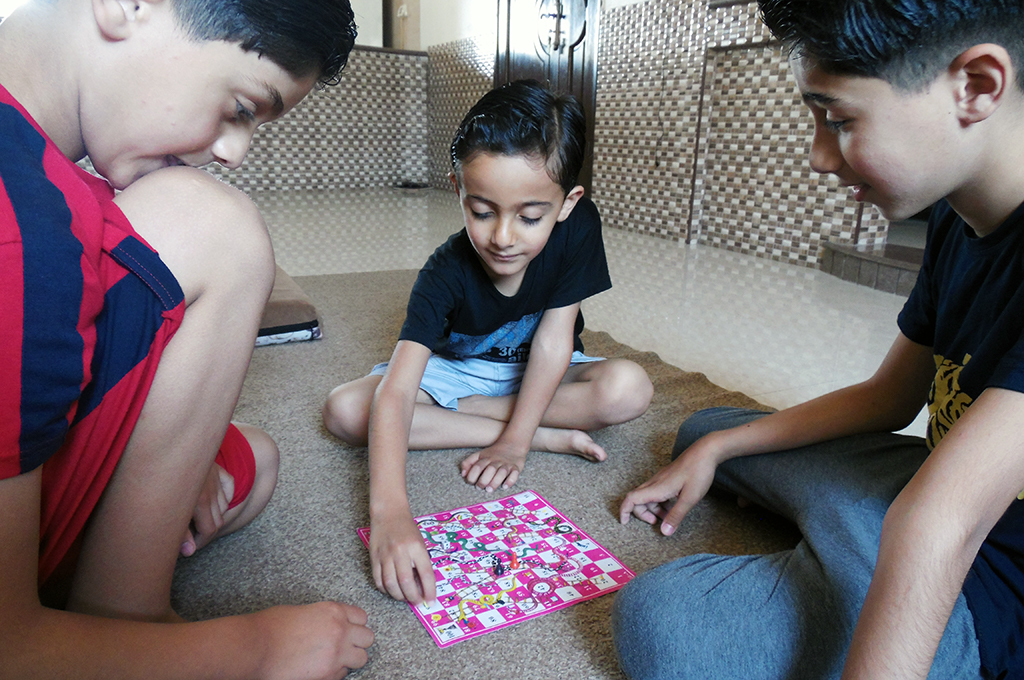 “I leave my family early in the morning because of my work documenting Israeli violations against children. My children ask me not to leave, fearing for my life because the Israeli bombardment does not distinguish between anyone; a civilian or military; a child or an elder,” said Mohammad.

“I look at them, and I feel really scared and worried that I may not see them again. I ask my wife to take care of them and not let them leave the house so they may not get hurt,” said Mohammad. “I go to work and listen to many stories of Israeli violations against children, like mine, in various areas of the Gaza Strip.”

Luckily, Mohammad’s wife, Maisa, keeps an eye on their children during the day.

“She sends me messages throughout the day to check on me and reassure me that my three mischievous children are fine,” he said.

“When I finish my work, I call Maisa and ask her if they need anything so I can buy it on the way back home. My young children ask for things that I used to buy for them, but there are not many open shops due to the Israeli aggression,” said Mohammad.

“Most of the roads have been destroyed, and most of the shops and markets are closed,” Mohammad told DCIP. “So I cannot bring all their needs. I bring only the basics and come home immediately, feeling sad for not being able to fulfill all of my children's requests and wishes.”

When he finally returns home, Mohammad feels relief. “I enter the house, feeling really happy to return safely to my children,” he said. “I become happier to know they are safe and unharmed.”

During times like these when the Israeli military bombards Gaza, Mohammad works around the clock.

“I then sit and carry on with my work. My children know what I need. One of them brings my bag in which I keep my laptop and my papers on which I wrote the Israeli violations against children. Another one brings me an extension cord. A third one brings the battery, because the electricity is cut off most of the time,” he explained.

"I start writing my reports and make many calls to the families of the child victims. My children are not allowed to play, laugh, or make any sound while I am on the phone because I talk to victims and make important calls related to work," Mohammad said. "We have electricity for two to three hours per day, therefore, my children do not enjoy watching their favorite cartoons. They are locked at home most of the time."

During previous Israeli military offensives, Mohammad’s children were young enough that he could reassure them of their safety. But this time is different.

“During this current Israeli aggression against Gaza, because of the intense strikes, the terrifying sound of rockets, and the continuous shaking of our home, I find that presenting the facts in a reassuring manner no longer convinces my children, especially in light of the state of fear and panic that we all suffer from,” Mohammad explained.

Living in Gaza during Israeli artillery and aerial strikes forces parents to make impossible decisions. Some families report putting all their children in one room at night, so that if their house is bombed, no one has to live to mourn the others. Other families spread the children out in different rooms or houses in hopes of some being able to live in the case of a bombing.

Mohammad says the “terrifying situation” has changed the way he parents his three children.

“Sometimes I resort to silence and other times to screaming at them. In both cases, I realize from deep inside that these reactions are a manifestation of disability: The inability of a father to provide a safe environment for his children, one of the basic human rights as stipulated in international conventions and norms for children," he said.

Everyday life for Palestinian children has been affected by the Israeli military offensive on the Gaza Strip.

“My children have not been able to play outside in the street since the beginning of the aggression,” said Mohammad.

“They wish to go out and play football, which they love, but I worry about them a lot and do not let them go out, because I have documented many stories of children being targeted and killed by Israeli air raids while playing in the street,” he added.

“My three children hope that the aggression will come to an end so that they go to our land at the entrance to the city of Beit Hanoun to water their plants," Mohammad said. "They have not watered them since the beginning of the aggression. They are worried that their plants, olive, and orange trees may get hurt.” 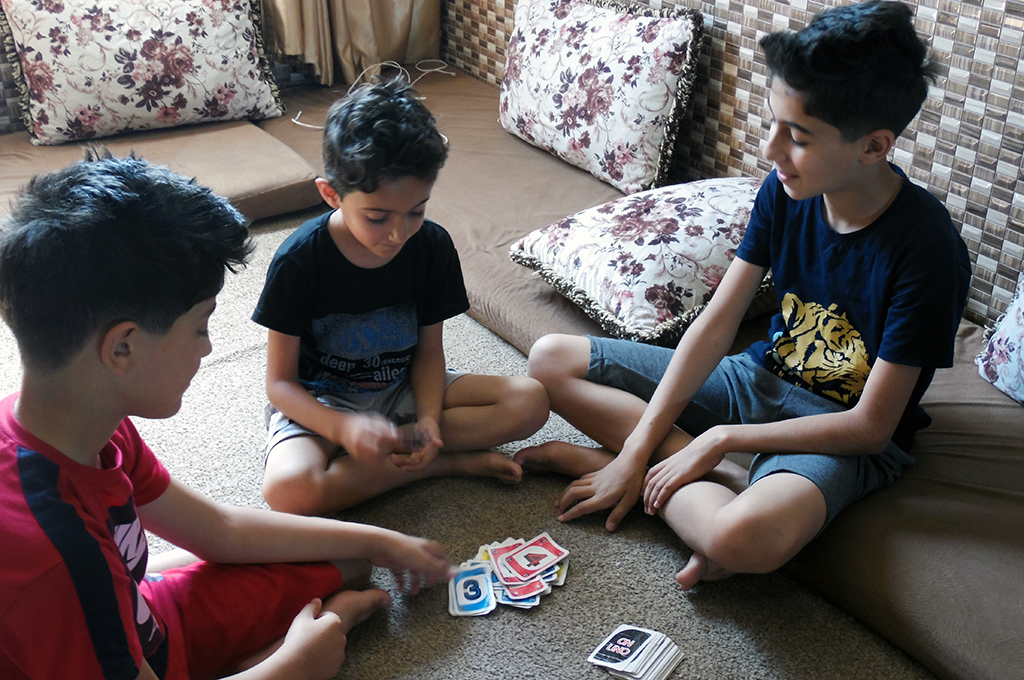 When asked what he would say to the international community, including lawmakers and global leaders, Mohammad’s message was clear.

“I address you with feelings of parenthood burdened with a sense of hopelessness and helplessness. I appeal to you to help me to find a refuge, a way out, or even a new lie through which I can protect my children from psychological tension, anxiety, and the disturbing dreams that they experience during the Israeli attacks and the psychological consequences that result from these attacks," Mohammad said.

“In Gaza, we do not have shelters, nor even safe places to refuge to in order to protect our children from the danger of death, destruction, and fear,” he explained.

“I do not hide that I hate the night because Israel intensifies its attacks at night," said Mohammad. "It frightens us. I carry my children while they are asleep and take them to the ground floor because of the heavy explosions that occur after 2 a.m. I am worried that Maisa may go into labor at night. What will I do? How will I act if that happens? It will be very difficult if it happens at night, as I will not be able to take her to the hospital except by ambulance. I hope that this aggression ends as soon as possible so that I can sit with my children safely and securely.”