Ramallah, June 15, 2021—An eight-year-old Palestinian boy was killed and his 16-year-old brother was maimed when unexploded ordnance (UXO) they had found exploded in Gaza City last Wednesday evening.

Obaida Salahuddin Salman al-Dahdouh, 8, was killed after a UXO that he had found on agricultural land adjacent to his home in Gaza City’s Zeitoun neighborhood detonated around 6 p.m. on June 9, according to documentation collected by Defense for Children International - Palestine. Obaida lost his hand in the explosion, and shrapnel struck him in the neck, severing his spinal cord and causing severe bleeding. Obaida’s brother, Ahmad Salahuddin Salman al-Dahdouh was hit with shrapnel in his legs and arms,  breaking bones in his left hand and severing tendons and arteries. He lost parts of two fingers on his left hand in the explosion.

“Despite a ceasefire and an end to active hostilities, Palestinian children continue to face threats from unexploded ordances in the Gaza Strip,” said Ayed Abu Eqtaish, accountability program director at DCIP. “Palestinian children bear the physical and psychological brunt of Israeli military offensives long after the bombs stop falling.”

On June 9, Obaida found an unidentified metal object on agricultural land adjacent to his home and brought it with him to his front yard, Ahmad told DCIP. Suspecting that it was part of a shell that had not detonated, Ahmad attempted to take the object from Obaida, but it slipped out of his hand, fell to the ground, and exploded, Ahmad told DCIP.

The al-Dahdouh family lives near an agricultural area that was bombed by Israeli warplanes during the 11-day Israeli military offensive on the Gaza Strip that began on May 10. Palestinian armed groups also launched rockets from the agricultural lands nearby, according to DCIP’s documentation. DCIP has been unable to determine the source of the UXO, as there was no shrapnel found at the scene.

After the Israeli military offensive on the Gaza Strip ended with a ceasefire on May 21, the boys’ father had collected shrapnel and missile fragments that had landed in front of their home and handed them over to the Palestinian police and other relevant authorities, Obaida’s brother Ahmad told DCIP. 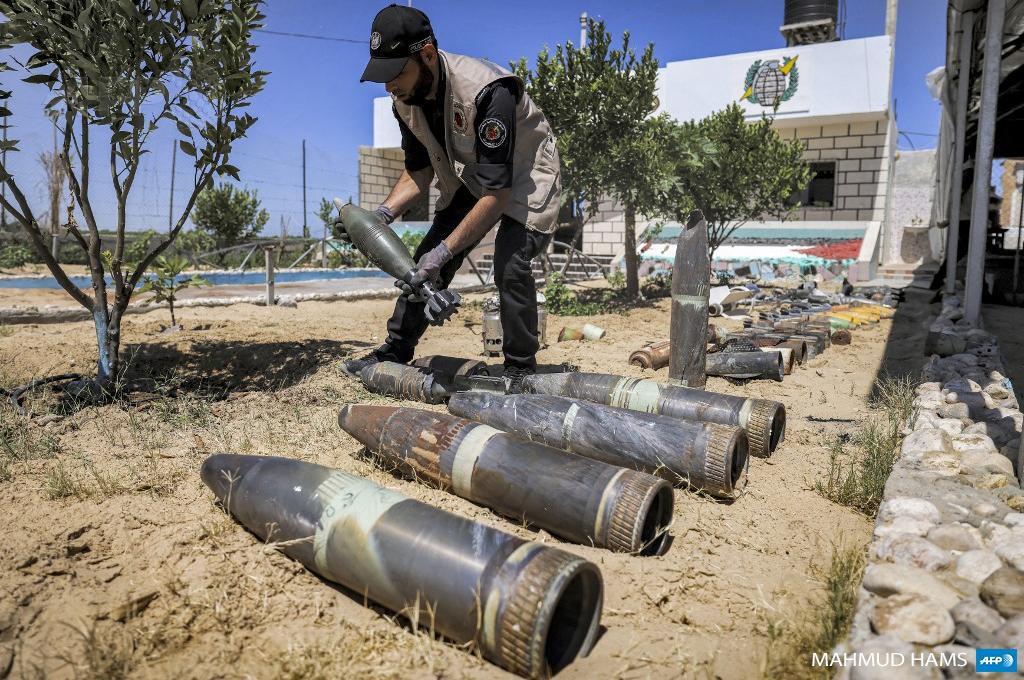 Explosive remnants of war (ERWs) are unexploded shells, mortars, grenades, rockets and bombs that are left behind after an armed conflict. ERWs have been a persistent issue in the  densely populated Gaza Strip as a result of the four major Israeli military offensives there since December 2008.

Between 2014 and 2020, 19 Palestinians were killed, and 170 were injured by ERW, according to the United Nations Office for the Coordination of Humanitarian Affairs (OCHA). During that same period, the United Nations Mine Action Service (UNMAS) removed and destroyed 150 large aerial bombs containing 29,500 kilograms (65,000 pounds) of explosive materials, and supported the clearance of 7,340 ERW items, UN OCHA reported.