Ramallah, October 2, 2020—Around 2 p.m. on August 16, six armed members of the Palestinian Preventive Security Forces raided 17-year-old M.A.’s home in Idhna, a town located west of the occupied West Bank city of Hebron. The officers, all of whom were dressed in civilian clothing, searched for M.A.’s father. Unable to find him, they instead detained M.A. without a warrant and transferred him in a military car to a Palestinian Preventive Security Forces’ base in Tarqumiya, just northeast of Idhna.

At the base, M.A. was questioned about his father and subjected to position abuse in the waiting area. Palestinian forces made him stand on one leg while holding a chair above his head until his interrogation began.

After an hour, a Palestinian Preventive Security Forces officer interrogated M.A., accusing him of concealing weapons to help his father. Through his interrogation, M.A. was not accompanied by his parents or a lawyer and was subjected to physical abuse.

"He slapped and beat me with his fist on my head, face, and chest, and on my legs and thighs with his knee," said M.A., in a sworn affidavit to Defense for Children International - Palestine. “He kept asking about weapons and demanded that I confess. The interrogation lasted for an hour, and he continued to beat me up."

M.A.’s arbitrary detention and ill-treatment provide a snapshot into the physical violence and due process violations experienced by Palestinian children detained by Palestinian forces and police units that are not authorized to arrest children under Palestinian law. 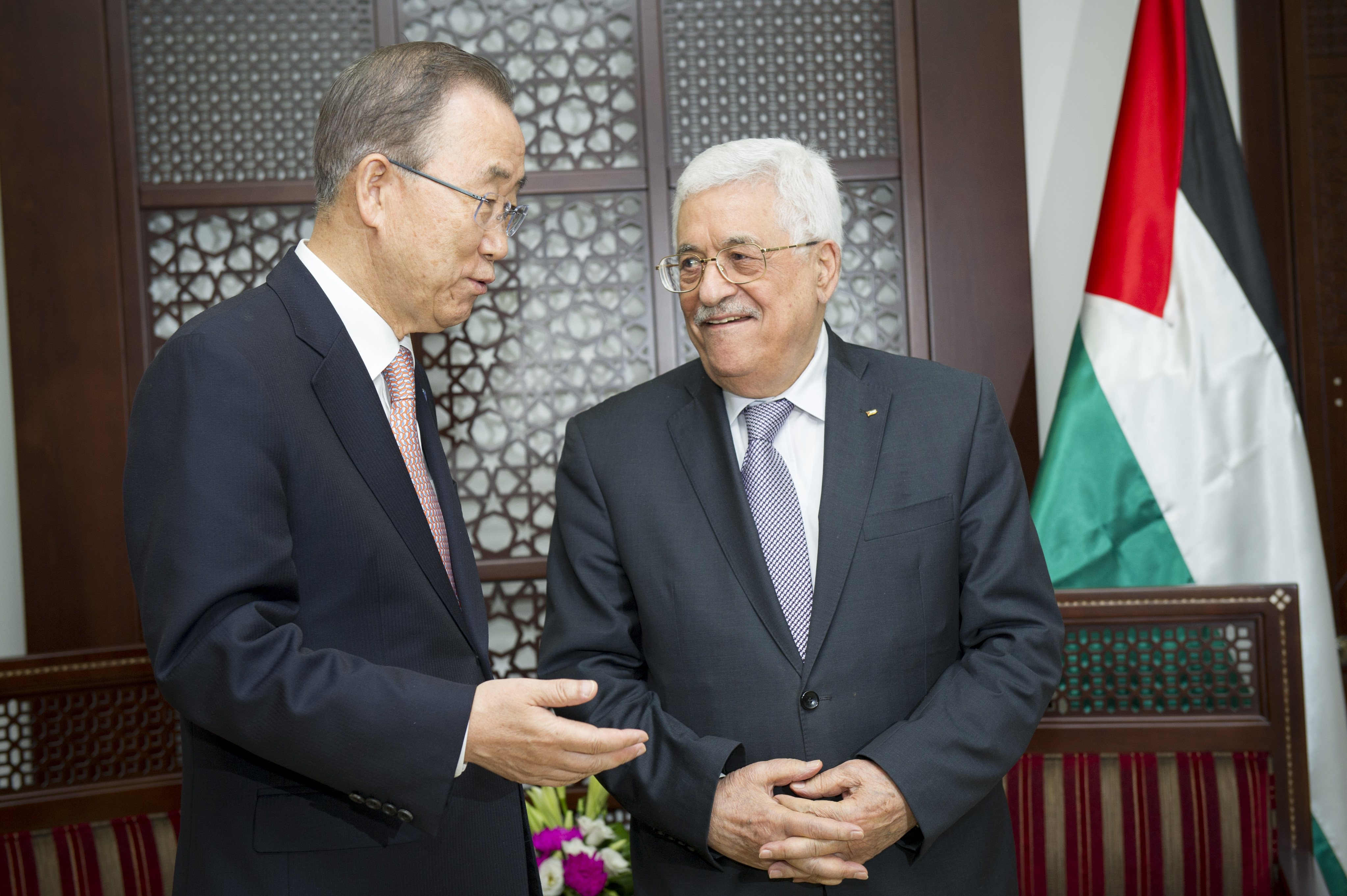 PART 1 Rights on paper, but not always in practice

While the legal framework in the Occupied Palestinian Territory does not provide a clear definition of torture, the State of Palestine acceded to the U.N. Convention against Torture and Other Cruel, Inhuman or Degrading Treatment or Punishment (CAT) in 2014. CAT has an absolute prohibition of torture and ill-treatment, and Palestinian security forces are obligated to comply with the prohibition.

The State of Palestine acceded to the U.N. Convention on the Rights of the Child (CRC) in 2014, which also includes an absolute prohibition against torture as well as a range of other rights and protections specific to children. In accordance with the CRC, Palestinian police and armed forces are obliged to respect and ensure this absolute prohibition, as well as other fundamental due process and fair trial guarantees including that detention only be used as a measure of last resort and that children have access to parents and lawyers.

In 2016, Palestinian President Mahmoud Abbas signed into law the long-gestating juvenile protection bill that meets modern international standards for safeguarding children’s rights, with a focus on alternatives to incarceration.

The Juvenile Protection Law unified and updated the Palestinian juvenile justice system, recognizing minors accused of criminal offenses – those under the age of 18 – as victims in need of protection, rehabilitation, and reintegration into society, rather than as criminals deserving of punishment.

Prior to the Juvenile Protection Law’s enactment, the Palestinian Authority in the West Bank had relied on a Jordanian law that dated back to 1954, while the Hamas government in the Gaza Strip currently applies British law enacted in 1937.

The best interests of the child serves as the guiding principle of the Juvenile Protection Law, with the deprivation of liberty used as a measure of last resort. The law mandates that children deprived of their liberty will be housed in rehabilitation facilities as opposed to prisons. The law also created juvenile courts and specialized units among the police, prosecutors, and judges for dealing with children in conflict with the law.

While the State of Palestine has made positive steps towards fulfilling its obligations with regard to a number of international juvenile justice standards, more needs to be done to ensure Palestinian children and their basic rights are sufficiently protected by all actors within the Palestinian juvenile justice system.

Between January and July 2020, children in the Palestinian juvenile justice system reported persistent ill-treatment at the hands of Palestinian forces and police. DCIP collected questionnaires from 61 West Bank children detained by Palestinian actors to assess rights violations while in custody. In 44 cases (72 percent), children reported being subject to various types of ill-treatment.

In addition to ill-treatment, when protections and provisions included in the juvenile protection law are disregarded, Palestinian children in conflict with the law are denied due process rights and other safeguards. 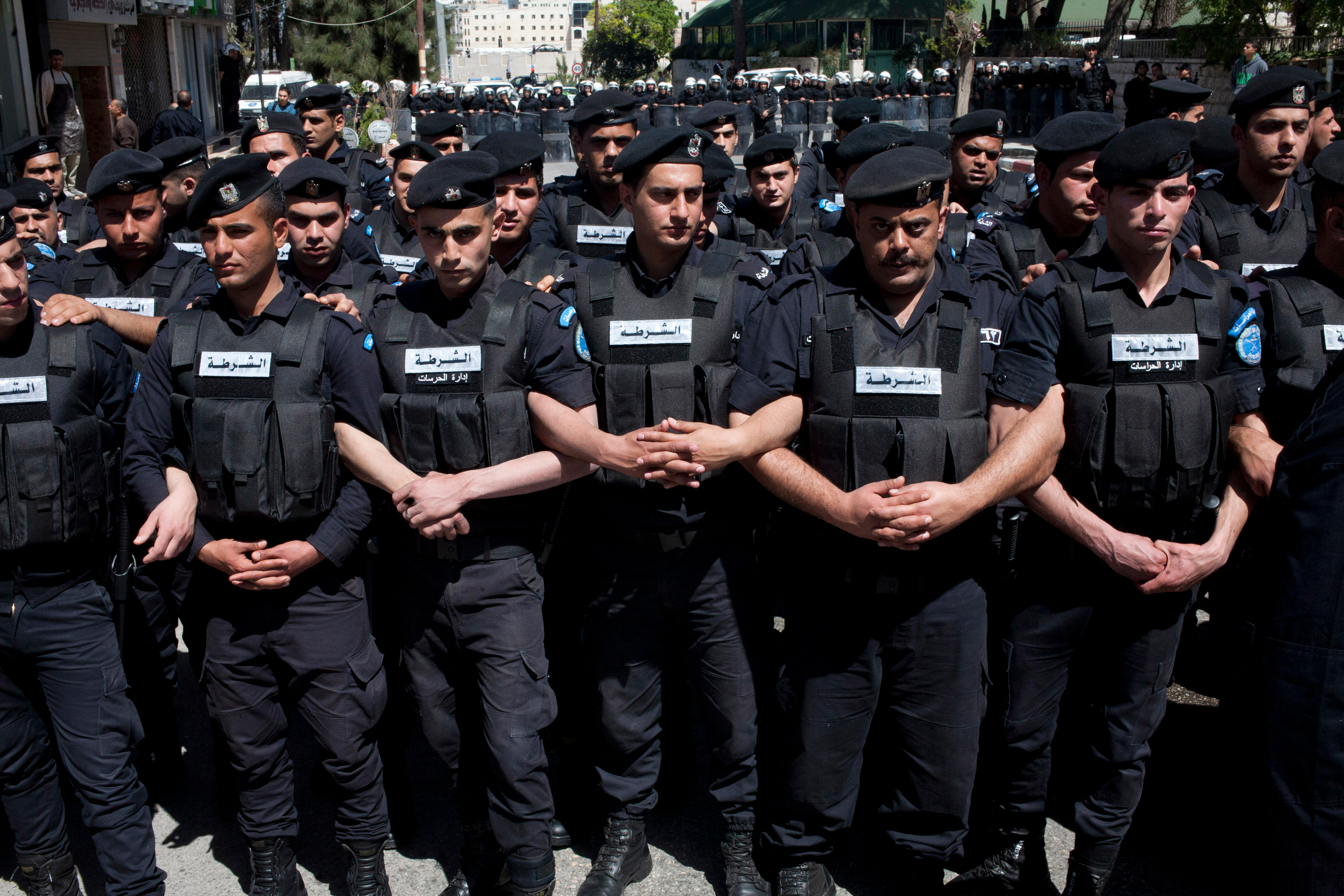 M.A. was released from detention the next day when his father turned himself over to Palestinian forces. Upon release, M.A., accompanied by his uncle, received a medical examination by the Palestinian Red Crescent Society and was provided with a medical report documenting the ill-treatment he experienced.

According to his medical report dated August 17, 2020, M.A. suffered multiple bruises and fractures to his upper body, including his face, head, chest, and ribs.

DCIP subsequently submitted a complaint to the Palestinian General Prosecution Office demanding an investigation into the ill-treatment inflicted on M.A. by Palestinian forces and that the individuals responsible to be held accountable.

However, there is no child-friendly complaint mechanism or other specific measures to protect children who allege ill-treatment and torture by Palestinian governmental actors. The existing process has significant obstacles and barriers that prevent children from fully enjoying their rights. It lacks transparency, and justice and accountability are elusive. A child-friendly complaint system is necessary for respecting, promoting, and ensuring children’s rights are recognized. 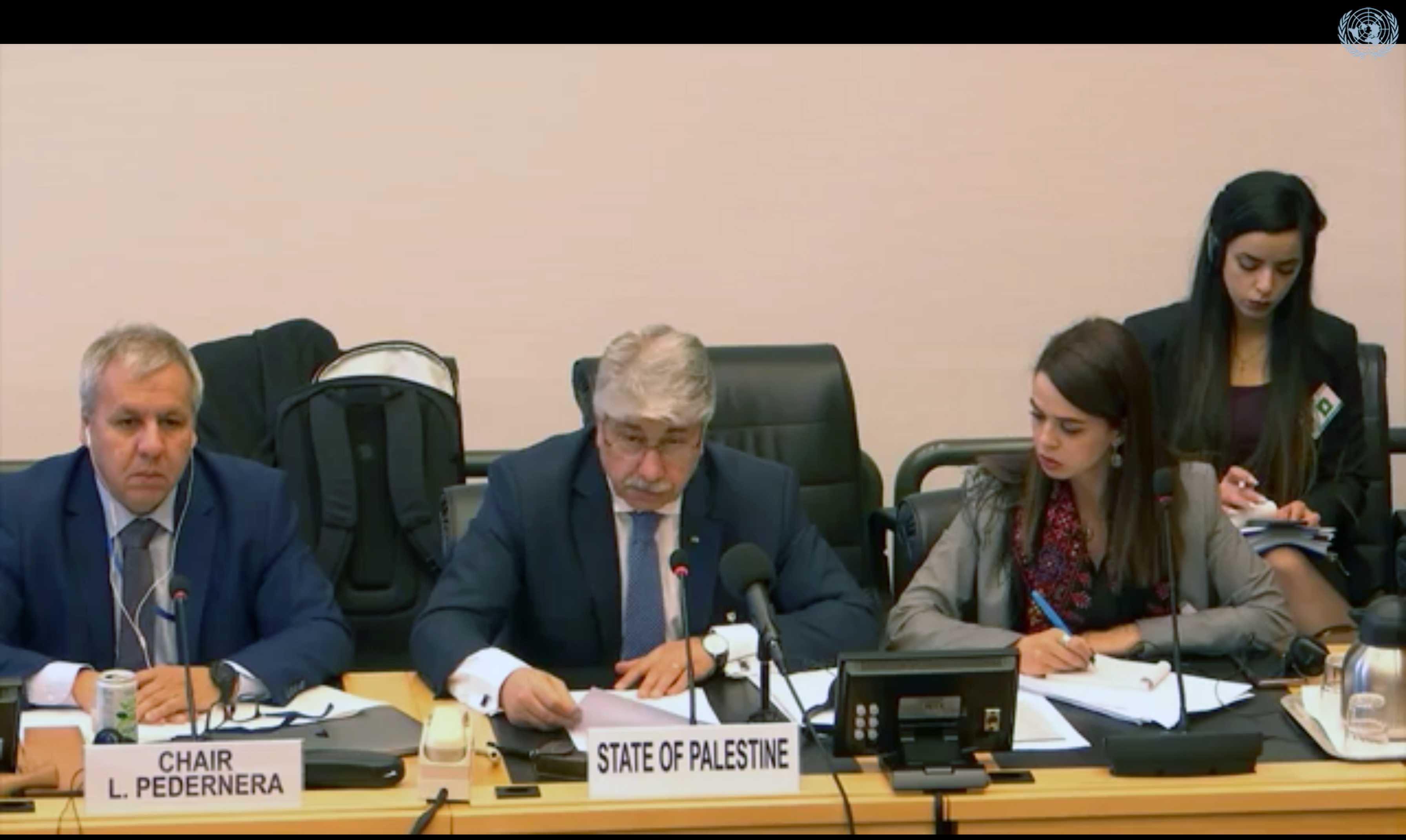 States must provide effective and child-sensitive means for children to have their complaints heard before appropriate bodies, according to the U.N. Committee on the Rights of the Child, an independent body of experts charged with monitoring compliance with the CRC.

Earlier this year, and for the first time, the Committee reviewed the State of Palestine’s compliance with the CRC, releasing its findings and recommendations on March 6. The Committee highlighted problematic gaps in the Palestinian juvenile sector, and one of its main concerns was the low rate of reporting for cases involving violence against children.

According to a report released by the Palestinian Public Prosecution, a branch of the State of Palestine’s judicial authority responsible for investigating and prosecuting criminal offenses, between 2016 and 2018 the office only handled with three complaints from children alleging violence by Palestinian officials.

“Complaints submitted by civil society organizations are not dealt with effectively as there is no clear time period for addressing them,” said Sawsan Salhat, head of the Socio-Legal Defense Unit at DCIP.

“In some cases, inquiry committees are established but fail to produce effective results,” said Salhat. “Moreover, there are no internal control systems in child detention centers, and individuals authorized by law to inspect the places of detention conduct unorganized visits and do not submit periodic reports.”

In 2019, the Juvenile Public Prosecution published a child complaint manual that explained the complaints process and revealed the unit received a total of 26 complaints in 2019 against government actors from Palestinian children in the Palestinian juvenile justice system. In 16 cases, physical violence was alleged by child victims, while there were three complaints of psychological violence and three allegations of arbitrary arrest.

According to UNICEF, a child-friendly complaints mechanism respects a child's dignity, prioritizes the best interest of the child as a primary concern, and ensures meaningful child participation.

Underreporting is a key challenge as a large disparity exists between the number of violations that occur compared to the number of complaints submitted to the Juvenile Public Prosecution. In addition, the complaint manual leaves many essential questions unanswered. For example, it is unclear how marginalized children or children in detention can access the mechanism to submit complaints.

A 2019 report by the Juvenile Public Prosecution revealed details of seven complaints all alleging child victims were subjected to physical violence. Three of these complaints were dismissed by the Juvenile Public Prosecution on the basis that any physical violence endured was justified as “the result of the aggressiveness of the child.” In the other four cases, two were dismissed due to lack of evidence, and two others were investigated with legal proceedings issued. However, after they were instigated there has been no further information released concerning the outcome of disciplinary or other actions against the alleged perpetrators. 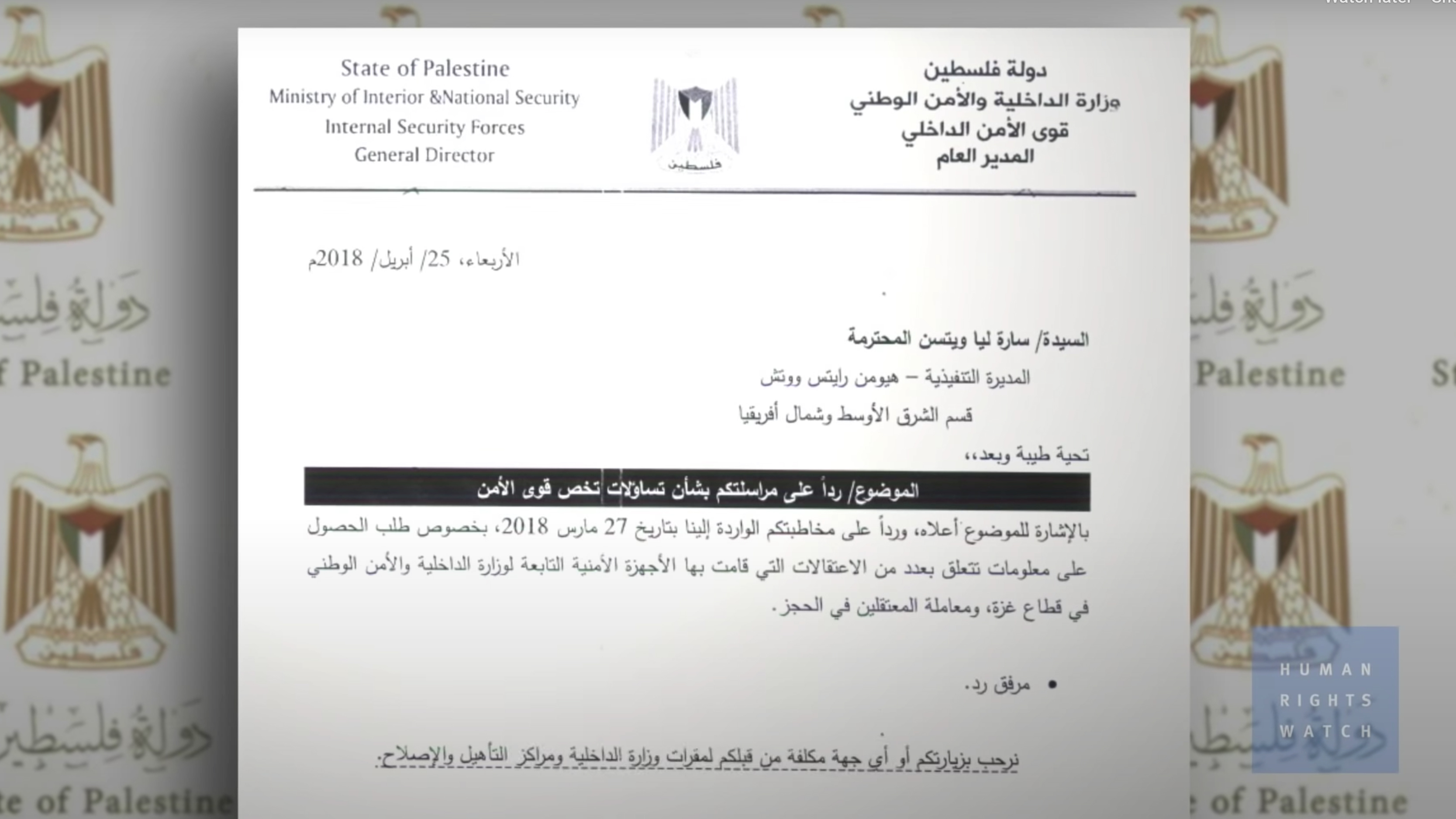 Under Palestinian law, torture is generally prohibited under the Amended Palestinian Basic Law, and no person, whether free or deprived of their liberty, can be subjected to torture or any form of coercion. Other laws such as the Juvenile Protection Law No. 4 (2016) clearly forbids any “physical or mental torture or cruel, inhuman or degrading treatment” and the Palestinian Child Act of 2004 prohibits physical and mental torture and any other form of cruel or degrading or humiliating punishment directed against children in conflict with the national law.

As a criminal offense, the Jordanian Penal Code No. 16 (1960), which is applied in the occupied West Bank, classifies torture as a misdemeanor but is inconsistent with the standard set forth in CAT. The penalty for individuals accused of torture varies depending on the gravity of harm, from a sentence of three months to three years in prison for “whoever inflicts any form of violence and force, not allowable by law, in order to obtain a confession for committing a crime.”

Without clear definitions under Palestinian law, the lack of clarity evolves into loopholes that perpetuate impunity for torture.

While law enforcement and Palestinian Preventive Security Forces and others established in the occupied West Bank have internal accountability mechanisms, complaints received by these bodies concerning allegations of torture or arbitrary arrest do not have a clear outcome, according to a recent report by Human Rights Watch (HRW).

HRW noted that the letter did not specify any outcomes of these investigations or what actions Palestinian authorities took in response.

HRW found that despite hundreds of complaints filed via internal oversight mechanisms alleging violations by Palestinian forces “only a small minority resulted in any sort of administrative sanction such as mandated training, work suspension, demotion, or transfer.” A small number were referred for criminal prosecution but no case resulted in a criminal conviction for arbitrary arrest or torture, according to HRW.

Existing accountability measures concerning Palestinian forces include general prohibitions but lack specific prohibitions against torture or cruel, inhuman or degrading treatment. For example, the Security Forces Service Law (2005) states that actions of security forces members that are incompatible with their responsibilities will be considered for possible civil or criminal prosecution. Furthermore, in Article 90 of the law, there is no explicit prohibition on torture included in the list of acts prohibited by officers serving in the armed forces.

While Palestinian forces have adopted codes of conduct, none of these clearly state any explicit absolute prohibition of torture or ill-treatment.

The Palestinian legal framework does not provide a sufficient foundation upon which accountability processes may take place with meaningful outcomes. Additionally, there is an absence of comprehensive or disaggregated data on complaints, investigations, prosecutions, and convictions of cases where a victim has alleged torture or ill-treatment by law enforcement, security, intelligence, and prison personnel, or of being subjected to administrative detention. This renders difficult any evaluation of practices within the Palestinian juvenile justice system and their impacts upon children.

While the State of Palestine has made some important progress to improve the protection and realization of children’s rights, clear and absolute prohibitions against torture must be implemented comprehensively throughout the Palestinian law alongside effective child-friendly complaint mechanisms and accountability measures aimed to end torture and ill-treatment against children.