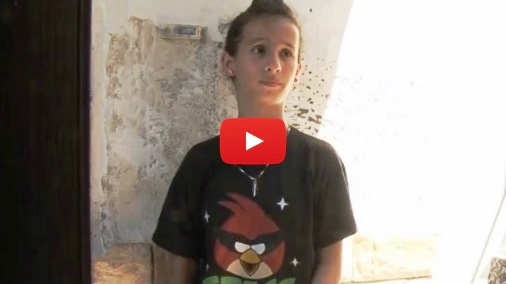 Tayma, 13, an aspiring Palestinian hip-hop artist, shares her experiences of growing up with settler harassment and intimidation in the East Jerusalem neighborhood of Silwan through her lyrics.

"We had a childhood just like everyone else, but it wasn't a normal childhood," says 13-year-old Tayma. "Everywhere we turn, the settlers are around us ... They came to our land, stole our land, and are saying that it's theirs."

Tayma lives in the Palestinian neighborhood of Silwan on the outskirts of Jerusalem's Old City. Israeli authorities issued many of the Palestinian families living in Silwan with demolition orders for their homes to clear the area for a national park.

Israeli authorities also approved a large tourism center in the heart of the neighborhood, which will include parking, an event hall, a cafeteria, and stores. They've handed development of the area to Elad, an Israeli settlement organization.

"All the houses here are under threat of demolition [by Israel] so that the settlers can build a park for their children," says Tayma. "They want to throw Palestinian families on the streets so that they can build parks for their own children."

Israeli settlers have moved into Silwan. With the aid of Israeli security forces, they subject the longtime Palestinian residents to daily violent harassment and intimidation.

Tayma and her sibling must share the same steps with settlers to access their home. "Sometimes we rub each other the wrong way, which creates some bad situations between us," she says. "There are cameras everywhere that watch the kids as they go up and down the steps."

"My dream is like the dream of any Palestinian kid," says Tayma. "It is to live in safety and not in the shadow of colonization, and not to feel crushed every time I leave the house. And my other dream is to become a famous Palestinian rapper."

Find out more about Tayma's story in this short film produced by Defence for Children International Palestine.