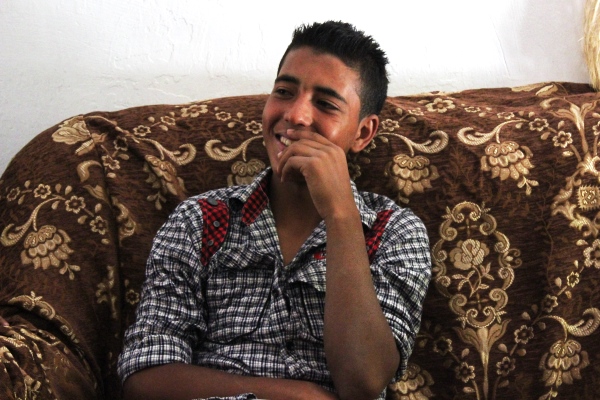 Due to his absence from school while detained at Ofer military prison, Yazan is required to repeat his class. Feeling ashamed of reintegrating with younger students, Yazan decided to leave school and work instead.

Ramallah, 22 August 2013–For a Palestinian child, waking up to thunderous banging and shouting at their front door in the middle of the cold and biting winter night is nothing short of a nightmare. In late January, it became 16-year-old Yazan’s reality when he was arrested from his home in Beit Ummar, a West Bank village near Hebron.

In early July, nearly two months following his release from detention, Yazan sits on the floral couch in his living room, reluctantly recounting the details of his arrest and experience in Israeli military detention. Biting his nails, he shares how soldiers beat, bound and blindfolded him. Yazan was accused of throwing stones, detained at Ofer military prison near Ramallah for 115 days and changed forever by the ordeal.

“I’m a lot more serious than I was before, and I feel much angrier and more frustrated,” Yazan explains reservedly. “I stay home more often than I did before my arrest, and I worry about my younger siblings when they go out. I don’t leave the house unless I have to.”

Last month, fireworks and celebrations across the West Bank promptly followed the annual release of Tawjihi results, the exam graduating high school students take during their final year. While many Palestinian families celebrated success, children caught up in the Israeli military detention system had a different experience.

Arrests and detention can adversely affect a child’s educational development. No textbooks and no formal educational or remedial classes are offered to children detained at Ofer prison, according to Yazan. Informal classes are organized by the prisoners themselves; with Arabic, English and Hebrew classes taught by adult prisoners for three hours daily.

In March, DCI-Palestine and Adalah submitted a letter to the Israeli Prison Service (IPS), the Israeli government agency responsible for the operation of Israel’s prisons, urging them to stop violating the right to education of incarcerated Palestinian minors and to carry out remedial steps. IPS regulations fail to address the right to compulsory education for Palestinian child detainees, which leaves hundreds of children in detention with little, sporadic or inadequate educational instruction.

Following their release, children have difficulty successfully reintegrating into school. This fall Yazan should be enrolling in eleventh grade. However, children that miss more than 60 consecutive school days must repeat the academic year regardless of the circumstances, according to the Palestinian Ministry of Education. Due to his absence from school while detained, Yazan is required to repeat.

Feeling ashamed of reintegrating with younger students, Yazan decided to leave school and work instead. In September, he will begin vocational training in auto mechanics while continuing to participate in counseling sessions specifically for ex-child detainees at the East Jerusalem YMCA Rehabilitation (EJ-YMCA) Program in Hebron.

In April, during the early morning, Israeli soldiers stormed a home in Halhul, north of Hebron, arresting Qusai, 15, from his bedroom. Qusai was accused of throwing stones and detained at Ofer military prison for 18 days. Upon his release from prison in May, and shortly before final exams, Qusai began attending weekly group counseling sessions at the EJ-YMCA in Hebron. The sessions helped him focus on his studies as he struggled to reintegrate into school, Qusai told DCI-Palestine. 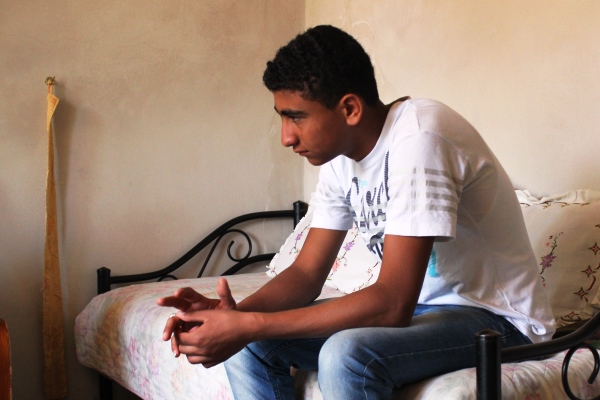 "I’m hoping to study bio-medical engineering in the future," says Qusia, 16, who earned an overall average of 92 percent this year despite serving three weeks in Ofer prison just before his end-of-year exams.

In July, at Qusai’s home, his mother proudly points to a framed academic certificate in the living room displaying her son’s total academic achievement score of 92 for the year. In the fall, Qusai will begin tenth grade and hopes to study bio-medical engineering in the future.

Even those children who are able to return to school face the psychological consequences of detention and its devastating effects on reintegration into their daily lives and routines.

Nightmares and sleep disturbances following trauma can result in the loss of concentration, a deterioration of the quality of learning, and difficulty focusing or planning. Excessive stress can contribute to a feeling that kids are living in unprotected and unpredictable environments, according to Khader Rasras, executive director and clinical psychologist at the Palestinian Treatment and Rehabilitation Center for Victims of Torture (TRC).

“Fear and anxiety make children who have experienced torture and abuse in detention hyper-vigilant. They will constantly be looking over their shoulders, out the window, and around them worried that soldiers will come for them again,” explained Rasras.

Many teachers and administrators remain unaware of the specific issues that child ex-detainees are dealing with upon returning to school. Consequently, many children may feel stigmatized by their classmates and teachers, becoming preoccupied with the trauma they have experienced rather than their studies.

“The arrests and detentions of children destroy entire generations. Israeli forces continue to demoralize children generationally, destroying their futures in the process,” said Ala Abu-Ayyash, psycho-social counselor and supervisor at the EJ-YMCA Program in Hebron.

Child ex-detainees often share initial reservations about seeking psycho-social help following their release, according to Nisreen al-Saeed, a social worker at the EJ-YMCA Program who has been working with Qusai and Yazan since their release.

“The trauma of detention degrades and dehumanizes, and helping child ex-detainees reintegrate within educational and professional environments appropriate for them re-humanizes their struggles,” said al-Saeed. “That’s where we step in.”