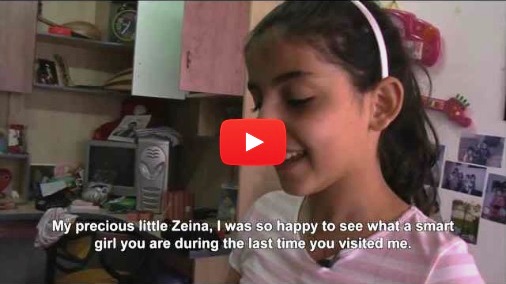 "I was 15 days old when my dad was sent to prison," says Zeina, 12, from the Ras al-Amud neighborhood of East Jerusalem. "And he’s serving a 20-year sentence."

Israel confiscated a large plot of land to build a settlement, according to Zeina. "My dad and some guys from Silwan put up tents and protested, so the police took them all away, and against the wishes of the residents of Ras al-Amud the settlement was built," she says.

Zeina wants her dad to be proud of her. Zeina's mom told her that her dad used to always listen to the oud, a pear-shaped string instrument. So Zeina has been learning to play the oud. "Every time I hear its music," she says, "I remember my father."

Zaina visits her father twice a month for 45 minutes each time, her mother told DCI-Palestine. During the visit, she's separated from her father by a glass partition and they communicate with each other via a telephone. The last time Zaina had physical contact with her father was 10 years ago.

In early September, Zaina's father was transferred to the Negev prison, Zeina mother said, where prisoners are only permitted one visit per month for 45 minutes.

"My dream is for my dad to come out of prison while I’m still a young girl so that he can play with me and help me with school," says Zeina. "He has never carried me or held my hand or taken me places. I want him to hold my hand as he walks me to school, to be with us when we go on a trip."

Find out more about Zeina's story in this short film produced by Defence for Children International Palestine.