Children bear the brunt of Israeli incursions into Kfur Qaddoum 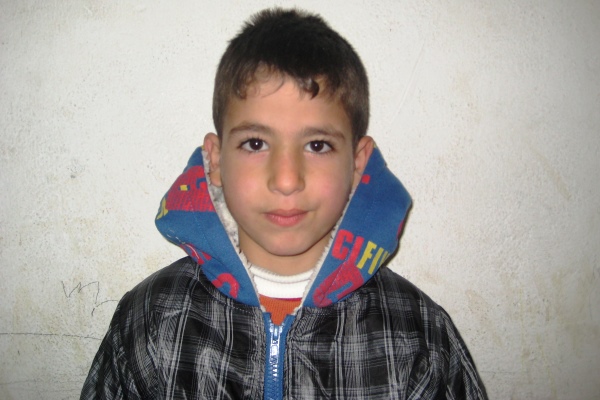 Ten children, among them 6-year-old Ali, required medical attention after a tear gas canister landed in the room where they had taken shelter during clashes between Kfur Qaddoum villagers and Israeli soldiers.

Ramallah, May 14, 2013—Night-time incursions, home invasions and arrests by the Israeli military occur frequently in the Palestinian village of Kfur Qaddoum near the West Bank city of Nablus. One young villager, Hanan, 17, visibly shakes while recalling the story of the three nights during which Israeli soldiers raided her home.

Woken up at 3 am by the sound of loud banging on the front door, Hanan was 12 the first time that soldiers entered her house to arrest a member of her family, her brother. The soldiers, she said, were kicking the door with their feet and rifles and entered the house with three dogs. “They were barking and they scared us.”

Soldiers yelled at them not to speak and started to search the house, damaging furniture and other belongings. “They never said what they were looking for,” said Hanan. The soldiers forced Hanan and her family to go outside in the cold and watch as they put her brother, handcuffed and blindfolded, into a military jeep. She remembers her father and uncle carrying her grandfather down the stairs because he could not walk.

The last time the soldiers entered her house, in 2012, Hanan and her younger cousins, aged between 2 and 8, were woken up by her father, who refused to leave them alone with the soldiers. Some of the children vomited as soon as they saw the dogs. Hanan had to watch in silence while the soldiers refused to allow them to drink water.

In 2003, Kufr Qaddoum’s main road, which passes the Israeli settlement of Kadumim and connects the village to the nearby city of Nablus, became strictly off-limits to the Palestinian villagers. Israel cited security concerns, said Samer Ishtawi, head of the village council, even though residents had never clashed with the settlers.

Israeli restrictions on Palestinian movement, particularly on towns and villages located next to settlements and the separation wall, like Kufr Qaddoum, dislocate communities from their livelihoods and basic services.

After exhausting all legal channels without any success, the village decided in July 2011 to organize weekly Friday-marches to protest the closure of the road.

The villagers said that soldiers used violent crowd control methods and fired live ammunition during demonstrations, often violating the Israeli military’s open fire regulations by shooting directly at the protesters from a close range. In February, one kid was struck in the stomach with a tear gas canister, while late last year another was hit in the head.

Israeli incursions into the village have increased since the first demonstration nearly two years ago, according to the village council, and now take place three to four times a week, always after midnight. So far, 130 residents have been arrested, among them 13 children.

“The message Israeli soldiers want to give is clear: we are here, we are controlling everything,” says Samir Ishtawi, head of Kufr Qaddoum village council. Their goal, he adds, is to scare and intimidate us.

In January, Israeli soldiers and a border policeman physically assaulted a child at the Huwara checkpoint, on the southern outskirts of Nablus, after finding out he was from the village, and threatened him with arrest if he participates in the weekly demonstrations.

“When we started demonstrating, we did not realize what impact this would have on our children,” says Murad Ishtawi, coordinator of the weekly marches.

Parents and teachers say children are diplaying violent behaviour. Kids often re-enact demonstrations or incursions, shouting and throwing rocks at each other, when playing. Ahmad, 10, dreams of soldiers chasing him or hiding behind a tree to grab him while he tries to evade capture. “We always play demonstrations,” he says, “I never play the soldier, I want to run away.”

Some parents say their children have trouble falling asleep at night. Teachers from Kufr Qaddoum’s elementary school for boys have noticed a sharp drop in grades. Soldiers increase night arrests and incursions during the exam period, according to Fatima Ishtawi, the principal of Kufr Qaddoum’s all-girls school, distracting the children from studying or sleeping, and leaving them fearful of having a tear gas canister thrown through their bedroom windows.

“Whenever houses are raided and families and parents are hit in front of these children they understand that nothing can protect them from the soldiers,” said Amani Odih, a psychologist for the YMCA in Qalqilya. “They know the soldiers might come to their houses and take them or their parents. They expect and wait for it to happen.”

Reactions between boys and girls vary depending on the role they play within their families and how they process their feelings of anger and fear, according to Odih. Boys need to take action and protect their families, she said, but their sense of responsibility is mixed with fear. The combination of these feelings strongly destabilizes them.

The impact of the Israeli military presence in the village also leaves girls feeling angry and scared, and for some, the trauma has caused their hair to fall out. Unlike boys, however, “girls feel safe expressing their fears and so they start dealing with the issue,” said Amani.

As a means of empowerment, children have started to join the weekly demonstrations. As soon as his father was arrested last year for a period of nine days, Khaled, 7, has not missed a demonstration. “I am not scared,” he said. “When soldiers come at night, I go on the roof with my father and we film them.”

The collective impact of the demonstrations, night raids and the constant military presence on the children of Kufr Qaddoum is evident. “Now,” says Hanan, “I dream that soldiers come to my house, telling me I can never go outside again.”

other | Fatalities and Injuries