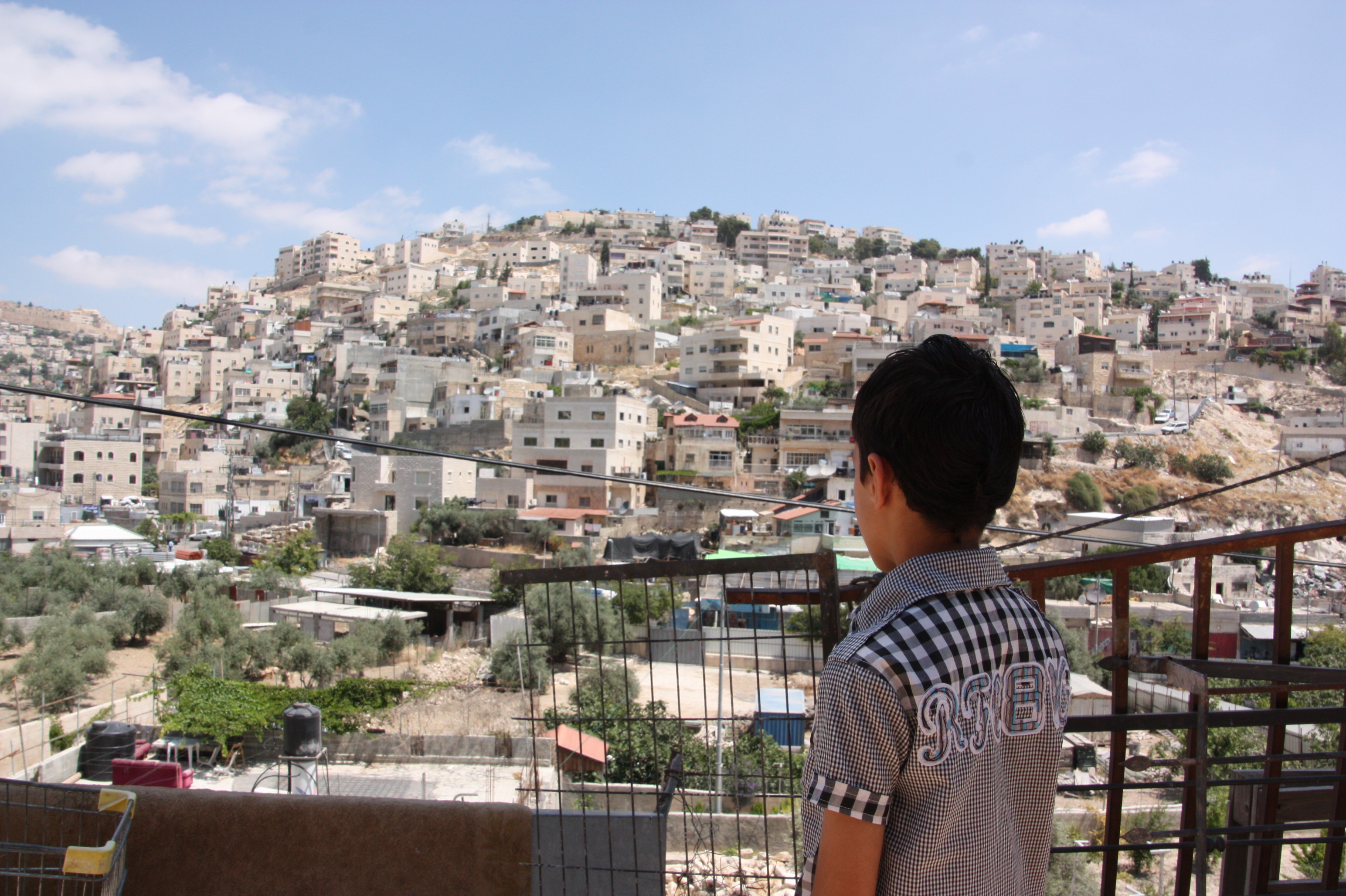 Children are often denied access to their families amid controversial citizenship laws.

A system of "quiet deportation" of East Jerusalem families has developed as a result of the restrictive laws applied to Palestinians in the city. As a result, a generation of Palestinian children have grown up living in uncertainty and fear, writes Miriam Pellicano in Al Jazeera English.

East Jerusalem, 19 July 2013­—If Tasneem, 14, a Palestinian living in East Jerusalem, could speak to the Israeli Minister of Interior, she would deliver this message: "Give us the right to be a family and give us the freedom to live. Don't imprison us."

Tasneem's family is one of thousands affected by the Citizenship and Entry into Israel Law, which prohibits Palestinians from the West Bank and Gaza from obtaining permanent or temporary resident status in East Jerusalem or Israel. The citizenship law applies to married couples even when one spouse holds Israeli residency or citizenship.

A system of "quiet deportation" of East Jerusalem families has developed as a result of the restrictive laws applied to Palestinians in the city. Between 1967 and 2011, more than 14,000 Palestinians have had their residency status revoked.

Since Israel's 1967 annexation of East Jerusalem, a move unrecognized by the international community, Palestinians have rarely been granted citizenship rights, only residency rights. Palestinians live with the threat of having their residency revoked.

As a result, a generation of Palestinian children have grown up living in uncertainty and fear. Children tell Defense for Children International Palestine, a local Palestinian child rights organisation, that they are often afraid, sad, or feel different to peers who are afforded different entitlements.

For Tasneem, the purpose of the law is clear. "It's a demographic law," she explains. "They don't want more Palestinian people in Jerusalem."

While the law was first issued as a temporary order in 2003, its enforcement has been extended several times, despite the Israeli High Court of Justice describing it as "a disproportionate violation" of the rights of Arab citizens and residents of Israel. In April this year, the Knesset approved an extension of the citizenship law bringing the prohibition on family reunification into its 11th year.

Parents with residency rights in Jerusalem and a Jerusalem identification card cannot automatically transfer their status to their children.

Alaa, an 11-year-old from the East Jerusalem neighborhood of Silwan, is currently in the process of applying for residency status, which his mother currently holds. He is in the middle of a lengthy and onerous application process that is required in order to register him with the Interior Ministry. It will be difficult for him to obtain Jerusalem residency status if his family fails to submit the request before his 12th birthday. If they apply after he turns 14, it will be impossible for him to receive any residency status.

The convoluted nature of registration has left families with children holding various statuses. Once children turn 18, they are unable to submit an application for child registration or family reunification. This leaves females in particularly vulnerable situations, as it obligates women to live alone or apart from their families, which is contrary to the general customs and traditions of the Palestinian family.

Alaa's mother notices that as he passes through a checkpoint he sinks in his seat and gets tears in his eyes. "I'm afraid that I will be left in the West Bank while the rest of my family stays in East Jerusalem," he says.

Mohammad Shihabi is a lawyer with the Community Action Center (CAC), which has an office to support families lodging applications for residency status in East Jerusalem.

"If children are not yet on their parent's ID card, and they are waiting on the process to obtain some kind of status, they can be subject to harassment at the checkpoints," Shihabi says.

"Registration processes can take years, and renewal of permits often requires a security check that may take anywhere from two months to one year. During this time children are particularly vulnerable."

Alaa is on alert when there is trouble in Silwan, which has a growing Jewish settler presence and where arrests of Palestinian children are common.

"I am very afraid when children are arrested," he says. "I stay inside the house when this happens and I don't move." Since he is not registered on his mother's ID, he is worried about what could happen to him.

The citizenship law has deleterious effects on children, including hampering the registration of children of Israeli residents - with a West Bank spouse - the denial of health, education and insurance services, and most importantly, the right to equality and family life.

In June 2007, HaMoked and several other human rights organisations filed a petition before the Israeli High Court of Justice challenging the citizenship law. The organisations highlighted the effect it has on children, and that the law not only separates spouses from each other, but also separates parents from their children. Ultimately, the challenge was rejected and the law was upheld.

'Prisoners in their own city'

The children have not grown used to the idea their father must stay in Eziriya, a suburb separated from Jerusalem due to the annexation. A song played on the children's channel about fathers disturbs them. "They cry when they hear the song," she says. "It is very hard on them."

"The families are under a constant state of pressure," says Rema Rezeq, a coordinator at the CAC's Women's Empowerment Unit. "Spouses don't know if their partner will be granted a permit to enter. Children become upset and distressed that their parent is separated from the family, or are sad when they see how their parents must live. They live with the constant fear that they will never see their parent again."

Since 2008, there has been an absolute prohibition of family reunification for any person from Gaza over the age of 14. This confines children to living in Gaza without one of their parents, or forces the parent to give up their entitlements in Jerusalem and move to Gaza.

There are potentially 10,000 unregistered children in East Jerusalem, which means they are exempt from a variety of social and education benefits. They are not able to obtain a driver's licence or permits, and cannot legally seek employment. They live a life in limbo, without either Jerusalem or West Bank identification. This leaves thousands of Palestinians as stateless persons. Their future and security are precarious in the city.

Sabah, 40, returned to Jerusalem three years ago after separating from her husband in the West Bank. Despite a court order that gives her custody of her children, she can only arrange entrance permits for her children to be with her and not residency status for them.

"I am afraid for their future," says Sabah. "They are high academic achievers, but cannot go to university here. If they go to a University in the West Bank, they will be away from me, and they do not want to live there alone."

Even if families are issued temporary or entrance permits, their renewal is dependent on a security check that can take anywhere from a few months to a year, which delays the reinstatement of an entrance permit. During renewal periods, entitlements are frozen for children and families, which can leave families without health, education and insurance benefits.

"It makes their future education difficult, their movement is restricted, and they cannot marry here," says Sabah. "My children feel like they are prisoners in their own city."

Repeated phone calls and emails for comment on this story to the Interior Ministry went unanswered.

The revocation of residency rights and the exile and deportation of Palestinians in East Jerusalem is one direct measure the Israeli government implements to counter the "demographic threat" to the state of Israel.

Palestinians are at risk of losing their Jerusalem residency if they chose to go overseas to study, work or live. If residents are overseas for more than three years and are unable to prove that their center of life is in Jerusalem or Israel, they will lose their right to renew or update their ID. Residency can also be revoked if Palestinians naturalize.

In contrast to the precarious status of Palestinians with Jerusalem residency, the Foundation for Middle East Peace reports "a large number of Israelis have dual nationality, including an estimated 500,000 Israelis holding US passports (with close to a quarter-million pending applications)."

While Palestinians navigate prohibitive and discriminatory legal and administrative systems to remain in Jerusalem, the Israeli government is financially supporting tens of thousands of immigrants to settle in Israel and illegal Israeli settlements in East Jerusalem and the occupied Palestinian territories.

The Ministry of Immigration Absorption, through their financial assistance programs, provides generous housing, education and health incentives, as well as generous tax exemptions to assist immigrants in their settlement process.

While immigrants can take advantage of these generous and attractive incentives, Palestinians are subject to exclusion from the National Insurance Institute (NII) if they cannot comply with measures that target their status and residency rights. They can lose their social and health insurance benefits by not complying with various caveats.

"This law exists to insult the people here in Palestine," says Alaa. "Its purpose is to degrade the Palestinians."

When DCI-Palestine fieldworkers asked him about his vision for the future, he tries to remain positive. "I will get the ID," he says. "I want to finish my education and I see beautiful things in my future."

If he could speak to the Minister of Interior, Alaa says he would request one thing: "Bring my father back to my home."

Miriam Pellicano is a consultant with Defense for Children International Palestine. This article was originally published in Al Jazeera English:
http://www.aljazeera.com/indepth/features/2013/07/20137813932642619.html.

The author acknowledges the contributions made by the Community Action Center for this article.