Israeli forces fire tear gas during clashes with Palestinian protesters following a demonstration against the expansion of settlements, near the village of Beit Dajan, east of Nablus in the occupied West Bank, on February 6, 2021. (Photo credit: Jaafar Ashtiyeh / AFP)

Israeli forces have shot and killed 17 Palestinian children with live ammunition this year, 15 in the West Bank, including East Jerusalem, and two in the Gaza Strip. At least nine Palestinian children were shot and killed in the context of demonstrations or confrontations with Israeli forces and did not present a direct threat to life or of serious injury when they were shot, according to investigations conducted by DCIP.

Armed Israeli civilians killed two Palestinian children in the occupied West Bank, including East Jerusalem. Most recently, 15-year-old Mohammad Nidal Younis Mousa succumbed to his wounds on December 6, hours after a private Israeli security guard shot him after he had allegedly committed a car-ramming attack at an Israeli military checkpoint near Tulkarem, according to information collected by DCIP. 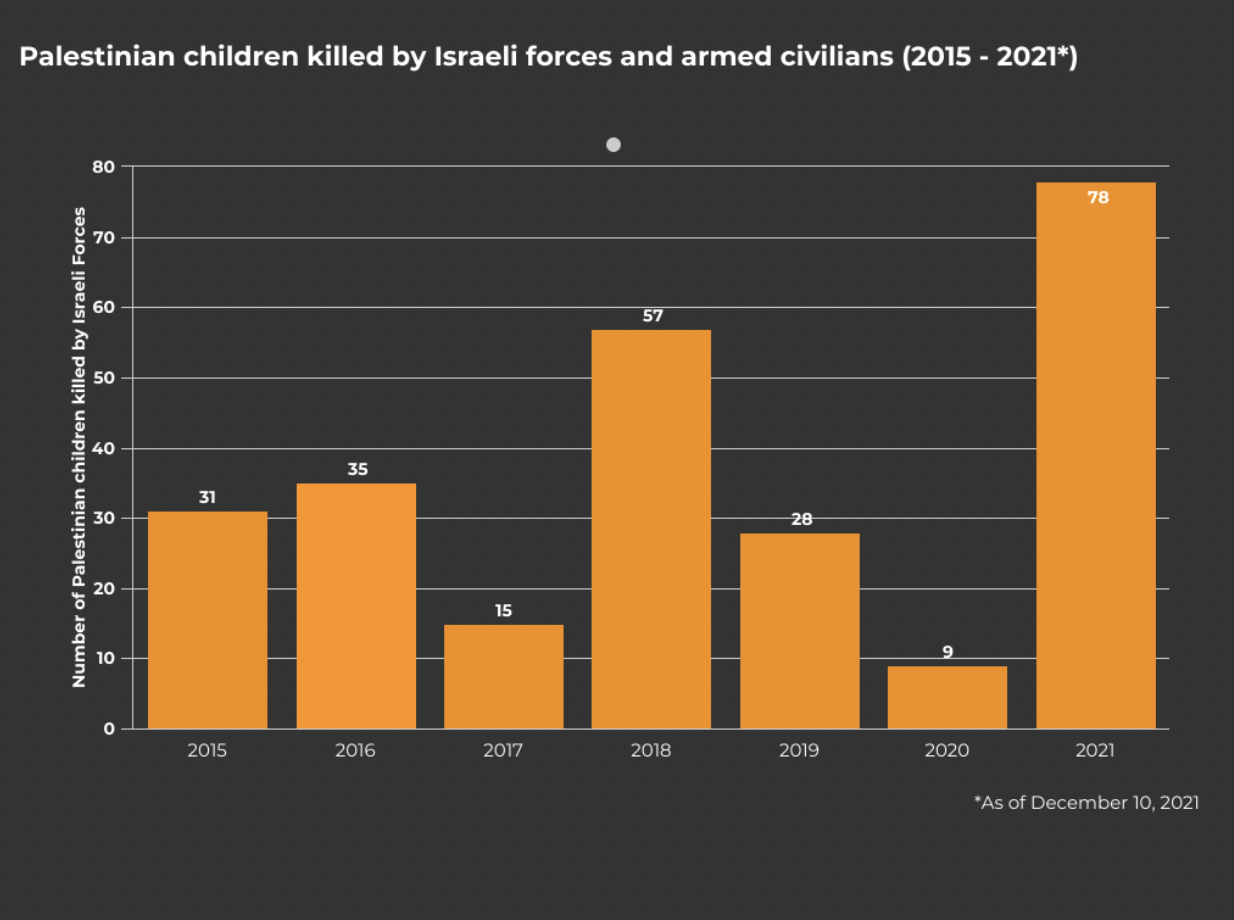 Six children killed on May 10, the first day of hostilities, in Beit Hanoun in the northern Gaza Strip were killed by an Israeli airstrike, according to DCIP’s investigation. At the time of the attack, DCIP had not yet determined the party responsible for the killings. Those killed in the Israeli airstrike included Rahaf Mohammad Attalla al-Masri, 10, and her cousin Yazan Sultan Mohammad al-Masri, 2; brothers Marwan Yousef Attalla al-Masri, 6, and Ibrahim Yousef Attalla al-Masri, 11; as well as Hussein Muneer Hussein Hamad, 11, and 16-year-old Ibrahim Abdullah Mohammad Hassanain, according to information collected by DCIP. Ten children were injured in the same airstrike.

DCIP investigations determined that seven Palestinian children were killed by rockets fired by Palestinian armed groups within the Gaza Strip during the 11-day escalation of violence in May. While a number of incidents remained unclear after our initial investigations in May, we have continued to gather information and evidence to determine the responsible party. 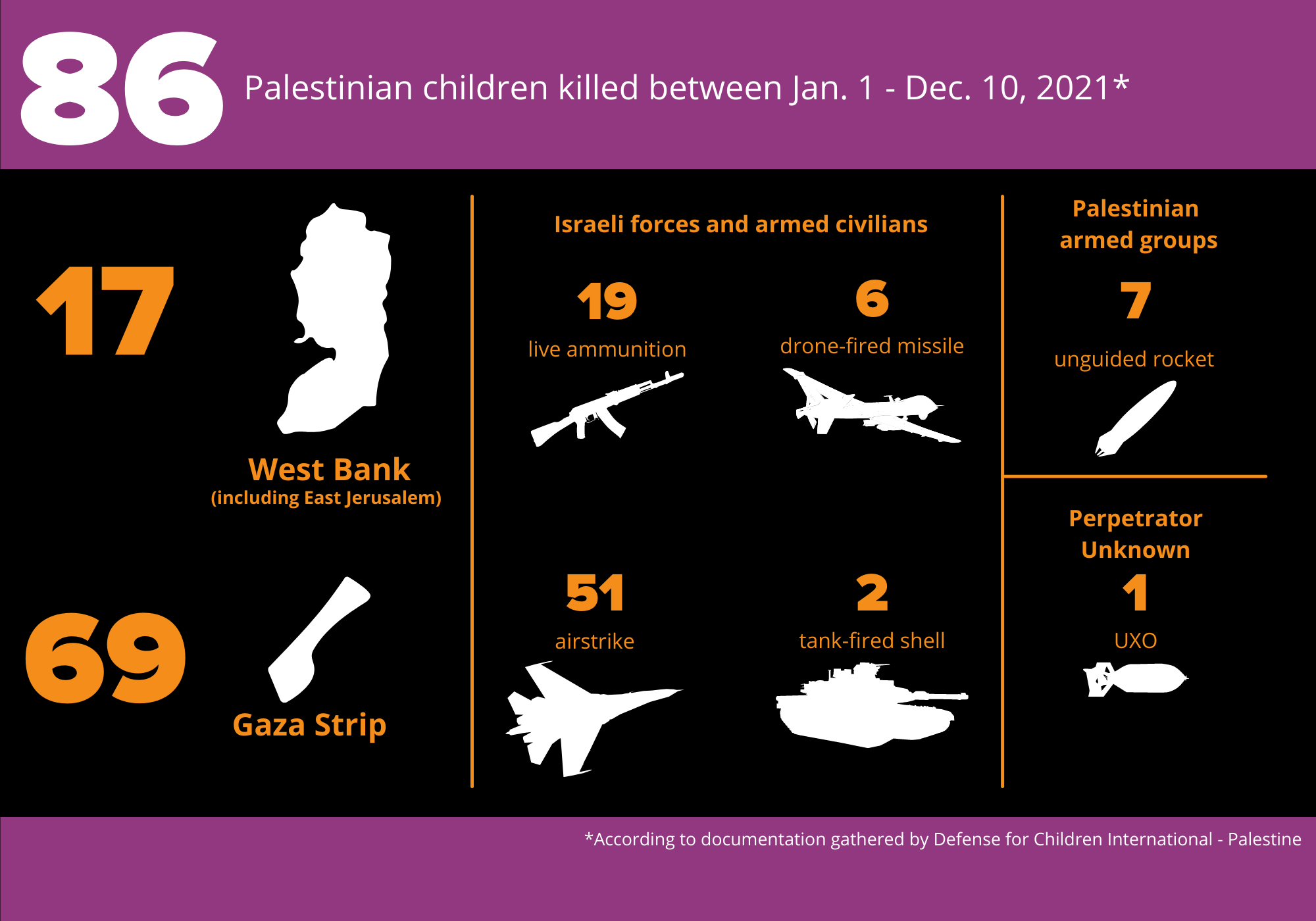 Mustafa Mohammad Mahmoud Obaid, 16, and five-year-old Baraa Wisam Ahmad al-Gharabli were killed on May 10 by an unguided rocket fired by a Palestinian armed group that fell short.

Hamza Mahmoud Yassin Ali, 12, was likey killed by shrapnel from a rocket fired by a Palestinian armed group in Gaza City’s Shuja’iyya neighborhood. Hamza was struck by shrapnel on May 11 and died the following day, according to documentation collected by DCIP. Based on initial information, DCIP originally reported that Hamza was killed by an Israeli strike.

Yahya Mazen Shehada Khalifa, 13, and Mahmoud Hamed Hasan Tolbeh, 12, were likely killed by shrapnel from unguided rockets fired by Palestinian armed groups on May 12. DCIP’s initial investigation and reporting attributed the boys’ killings to an Israeli airstrike. A subsequent investigation by DCIP indicated that the boys were likely killed by shrapnel from two Palestinian-launched unguided rockets that had collided in the sky above Gaza City’s Shaafout neighborhood.

Six-year-old Butheina Mahmoud Issa Obaid was most likely killed by shrapnel from an unguided rocket fired by Palestinian armed groups, according to documentation collected by DCIP. She was playing outside her home in Jabalia when she was struck in the head with shrapnel on May 14. DCIP was unable to determine the cause of her death based on the initial information collected.

Nagham Iyad Abdulfattah Salha, 2, was likely killed by an unguided rocket launched by a Palestinian armed group. Nagham was killed alongside her parents, Iyad and Imhawish, in their second floor apartment on May 19. Based on initial information, DCIP had originally reported that she was killed in an Israeli airstrike.

DCIP has been unable to determine the perpetrator responsible for one child’s death. Obaida Salahuddin Salman al-Dahdouh, 8, was killed when an unexploded ordnance (UXO) that he had found on agricultural land adjacent to his home in Gaza City’s Zeitoun neighborhood detonated, on June 9, according to information collected by DCIP. DCIP was unable to determine the source of the UXO.

Since 2000, 2,198 Palestinian children have been killed as a result of Israeli military and settler presence in the Occupied Palestinian Territory, according to DCIP's documentation.